The Paranormal Event of the Summer: Streaming LIVE ParaCon Ghost Hunt from #TheOmanHouse

Produced by The Oman House Ent and David Oman who have created an Virtual Online event like no other. 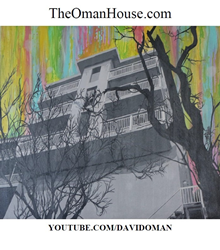 Ghost stories have been heard for decades and they are a dime a dozen in Hollywood, where every mansion and storefront has a link to a restless spirit. But can the memories and spirits of a famous fifty one year old Hollywood Murder still be haunting this home in Benedict Canyon in Beverly Hills, CA? It can if they live four doors down from David Oman’s House. David Oman has witnessed first-hand with actual experiences, and he lives 150 feet from the site of the original house where Sharon Tate was murdered on August 9, 1969. David’s experiences began with a ghost sighting in this own bedroom where a spirit of one of the victims of the Tate murders stood at the foot of his bed, pointing to the driveway down the road.

Keeping an open mind to something that could have been perceived of as ludicrous, David has invited psychics and paranormal specialists to do a preliminary investigations, take video footage and 35mm film still photographs as well. The still photos revealed some wild images and were visually stunning.

Oman had invited psychics and paranormal investigators to do an investigation in the house in the middle of July 2005, with surprising results. World renowned Parapsychologist Barry Taff, who conducted the investigation, recently commented on his findings.

There were many presences in the house, revealed through unusual orbs, shadowy images and streaking light patterns that were later examined by Dr. Barry Taff, one of the world’s leading Para-Psychologists and someone who has investigated over 4000 reported hauntings in his 50 year career. Taff confirmed that the images were real and that the house merited a full scientific investigation and that will begin soon. (It was Taff worked with Dr. Thelma Moss at UCLA back in the early 1970’s and who originally investigated the Culver City, CA haunting incident that became The Entity movie in 1981).

The Paranormal event of the summer: David Oman and The Oman house present: The #LIVE Streaming virtual Paracon Ghost Hunt & Séance from #TheOmanHouse. Friday, August 21st and Saturday, August 22nd, 6pm til 2am (PST) with celebrity interviews and paranormal experts such as world renowned parapsychologist Dr. Barry Taff, Scott Michaels of Dearly Departed tours, reviews of new captured videos shot here, and then a live ghost investigation with a séance lead by Hollywood witch Patti Negri and Lilia Carron Willis. Chris Fleming famous TV Psychic (Psychic Kids) will also be interviewed for the event as well. Robin Keats producer of Paranormal TV show ‘Into the Unknown’ will be interviewed as well. Dustin Pari from Ghost Hunters will be a guest interviewee as well.

There will be a "Live Q&A" in the chat room throughout the night. 8 hours "Live Streaming" will happen each night. Tickets are $10.00 each for the entire weekend with no commercials. The Oman House has been called, 'The Mount Everest of Haunted Houses' and sits just down the drive from where Sharon Tate once lived. The Oman House has been featured on Ghost Hunters, My Ghost Story, Paranormal Witness, Haunted Adventures, Dead Famous live, Searching for Satan and Ghost Adventures Aftershocks. So come join us from the safety of your home or where ever and watch us investigate the haunted Oman House.

DAVID OMAN (Producer/Creator/Co-Writer/Author) is a native of Los Angeles. Oman has been intrigued by the paranormal from his early childhood and has been curious about the Spirit World ever since. In 1999 Oman with his father started to build the house on Cielo Drive, just down the drive from the infamous Sharon Tate Murders aka the Manson Murders. David has just completed his first book, Ghosts of Cielo Drive, the Afterlife of Sharon Tate and the Spirits of the Oman House. After 2 years of living in the house, he created a story based upon his experiences in the home with the activity, titled House at the End of the Drive. It was shot on location at his home and brought his story to life. Since he moved into the house, the activity has been quite apparent; so much so that the Oman house has been on 8 paranormal reality shows, Ghost Hunters, Dead Famous Live, Searching for Satan, My Ghost Story, Haunted History, Paranormal Witness, Ghost Adventures, Ghost Adventures After Shocks. He has also been featured on Larry King Live, EXTRA, and TMZ. His house has also been visited by Lisa Williams and James Van Praagh. 5 years ago he decided to install 19 HD 1080pwith IR and audio Cameras throughout his home and has captured some serious evidence of the paranormal. Since then he has recorded a plethora of evidence of the paranormal activity here. He has his channel at http://www.youtube.com/davidoman to see the footage shot here at The Oman House.

The book is available only at http://www.GhostsOfCieloDrive.com.

Attendees will be at the Paracon virtually with our investigation team of paranormal investigators &research group on a Ghost Hunt in the house and also one of our mediums will be a part of the investigation as well. The house will be fully canvased with infrared cameras throughout the house and rim pods and devices to pickup the spirit activity will also be used through the house.

For more information and tickets go to the ParaCon http://www.TheOmanHouse.com