The Pat Tillman Foundation Announces the 2019 Class of Tillman Scholars 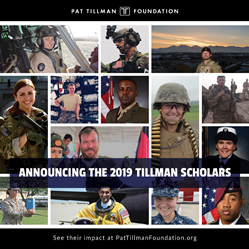 “This class of Tillman Scholars, like those before them, have shown exceptional potential to bring their unique experiences of service to bear on the challenges and opportunities that face our country today,” - Dan Futrell, CEO of the Pat Tillman Foundation

Today, the Pat Tillman Foundation (PTF) announced the names of the 60 U.S. service members, veterans and military spouses chosen as 2019 Tillman Scholars - the 11th class of Tillman Scholars. In recognition of their service, leadership and potential, the newly selected class will receive more than $1.2 million in scholarship funding to pursue higher education and continue their service in the fields of healthcare, business, law, public service, STEM, education and the humanities. For the full list of 2019 Tillman Scholars, with the service branches, institutions and fields of study from which they were selected, please visit: https://pattillmanfoundation.org/meet-our-scholars/

“This class of Tillman Scholars, like those before them, have shown exceptional potential to bring their unique experiences of service to bear on the challenges and opportunities that face our country today,” says Dan Futrell, CEO of PTF. “They now join a community that will not only maximize, but amplify their impact.”

“Tillman Scholars are uniquely positioned to make an impact with effects that will ripple across communities and around the world,” said Marie Tillman, Board Chair and Co-Founder of PTF. “We are proud and excited to announce the 2019 class, and are looking forward to seeing how this incredible group of people makes their mark in the years to come. ”

To date, PTF has invested more than $18 million in academic support and named over 600 Tillman Scholars at more than 100 academic institutions nationwide. From July 18-21 in Chicago, PTF will convene the 2019 Pat Tillman Leadership Summit powered by the NFL, bringing Tillman Scholars from around the U.S. to address some of the toughest challenges impacting the country and their communities.

If you are a member of the media who wishes to arrange an interview with Pat Tillman Foundation Board Chair and Co-Founder, Marie Tillman, Chief Executive Officer, Dan Futrell, or a 2019 Tillman Scholar, please contact Shannon Speshock at (224) 408-0451, sspeshock(at)pattillmanfoundation(dot)org.