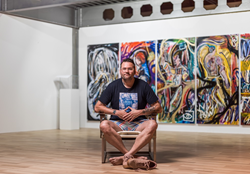 Riezebos’s two-week sojourn at The Peninsula New York – during which he will set up a temporary painting studio in the hotel’s Gotham Lounge, give talks, engage in Q&A sessions, and sign copies of his new book – is the latest iteration of The Peninsula Hotels’ dedicated art immersion program, Art in Resonance. The program, which facilitates partnerships between ground-breaking contemporary artists and Peninsula properties around the world, offers both inspiring experiences for hotel guests and a spotlight for creators pushing the boundaries of their mediums.

While in residence at The Peninsula New York, Riezebos will create three specially commissioned paintings in his characteristic neo-expressionist style, whose bold dynamism and use of rebus evoke the work of Basquiat and de Kooning. During a two-day open studio period, he will also engage in discussion with visitors – including a class of art students from a local middle school – as he paints. Discussions, filmed interviews for an upcoming documentary about Riezebos, and a signing of the artist’s latest book, Plus Ultra, will follow. The events will culminate with the installation of his paintings in the hotel’s Palm Court, where they will remain through spring of 2022, along with a celebratory cocktail reception on November 19.

"We are delighted to have Peter join us for Art in Resonance – especially as both New York and other parts of the world reopen to visitors,” said Jonathan Crook, General Manager at The Peninsula New York. "By showcasing Peter’s vibrant artwork, and fostering creative exchange for our guests, we are celebrating the world’s return to vital, full-spirited life.”

About Peter Riezebos
Dutch-born artist Peter Riezebos is known for his powerful, charismatic, and deeply interactive artworks. His large-scale paintings, employing bold color and neo-expressionist composition, command the attention and the engagement of the viewer. His work has been exhibited at preeminent galleries in Shanghai, New York, Los Angeles, and Amsterdam, and features in some of the world’s most significant private art collections. Although he paints on location all over the world, he is primarily based in Shanghai and Amsterdam.