March 31st, 2021: The Percentage Project is a 501(c)(3) non-profit that launched its fourth and largest annual social media campaign yet in collaboration with 11 schools across the country on March 31st, 2021. The campaign showcases the experiences of students in computer science using aggregated data and statistics. 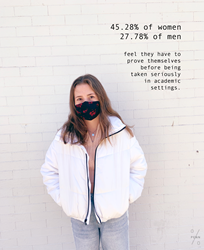 Statistics taken from climate surveys of universities' computer science departments are edited onto photos of community members, adding a face to the numbers.

“It’s really important to have data and actually collect it so that we understand where the disparities are,” said Percentage Project President and Co-Founder Stephanie Tang.

The nonprofit collects data through climate surveys sent out to universities’ computer science departments that ask students about their experiences. An example question asks if students have been told their gender identity has given them an unfair advantage in gaining job opportunities. This data is collected by the Percentage Project’s Campus Directors, who act as liaisons between the organization and their respective schools.

Responses are then grouped by various demographic breakdowns, including gender, race, ethnicity, sexual orientation, first-generation status, and socioeconomic status. An example statistic from this year is that 52% of women, 5% of men, and 22% of non-binary students have been told that their gender identity has given them an unfair advantage in gaining job opportunities.

“It’s really important to have data and actually collect it so that we understand where the disparities are,” said Percentage Project President and Co-Founder Stephanie Tang.
Statistics are then edited onto photos of members of the community and posted on Facebook in unison, showing that challenges of underrepresented groups are not just numbers on a page.

Expanding from 1 school in 2018 and 2019, to 4 schools in 2020, and now to 11 schools in 2021, the Percentage Project continues to expand its reach and visibility. The organization works closely with the computer science department at each partner school, and this year received a total of 1,660 survey responses and 158 photos.
“We’re very grateful to have many amazing secondary institution partners who are willing to work with us to become more informed about the climate of their engineering schools,” said Outreach Director and Co-Founder Lucia Huo.

About the Percentage Project:

The Percentage Project, founded at the University of Pennsylvania in 2018, is a 501(c)(3) nonprofit organization currently collaborating with 11 universities across the United States. It aims to highlight experiences of post-secondary education students in computer science-related fields through data-driven advocacy, and to ultimately encourage reflection and conversation on the state of students from all backgrounds.