Thin film distillation systems are growing in popularity in the cannabis extraction industry. Now, Ai Vacuum is carrying the most advanced system on the market, the Prescott 1000. It has a number of advantages including near continuous operation. 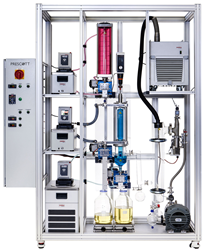 "While other units move from batch to batch, which uses a lot of time in-between, the Prescott 100 uses gear pumps to allow near continuous operation."

Thin film distillation systems are growing more popular in the cannabis extraction industry. In fact, thin film, also known as wiped film, is the method of choice for some processors. Now, the next generation of thin film turnkey is here. Introducing the Prescott 1000. It offers near-continuous separation, ease of operation, minimal material loss, and high throughputs and potencies. Ai Vacuum, an industry leader in post-processing equipment, now carries the Prescott 1000. How does it work?

Steven Bennett, PhD is the founder and Chief Science Officer at Prescott Logic Technologies. He told us, “First, winterized crude oil goes into the feed vessel at the top left of the unit. Below that stands a series of gear pumps. They pull material through and put oil in and out of vacuum, during operation.” While other units move from batch to batch, which uses a lot of time in-between, the Prescott 100 uses gear pumps to allow near continuous operation.

After the oil enters the first gear pump, it’s put under vacuum and sent to the still. The still is a glass cylinder heated by circulating thermal fluid. Inside, PTFE rollers spread the oil around the sides, in order to maximize surface area. This is so the still can evaporate as much as possible. “The cannabinoids evaporate from the inner walls of the still,” Dr. Bennett said.

The molecules don’t have to go far to be recondensed. “They travel just a few centimeters to the condensing finger in the middle, where it’s 50 degrees colder, and stick to it,” Dr. Bennett said. “Then, they run down through the system via a gear pump.” At the bottom, two more gear pumps push out the distillate, returning it from vacuum to atmospheric conditions. Vessels underneath catch and contain it. You can collect the distillate in any vessel you choose, be it a beaker or a mason jar.

While most systems are paired with a rotary vane pump, the Prescott 1000 comes with a scroll pump. The reason is, it’s corrosion-resistant and requires little maintenance. Another advantage, the cold trap is about ten times the size of competitors’ models. It’s paired with a very deep immersion cooler, too. Deep vacuum is another advantage. The Prescott 1000 can get down to an impressive 10^-5 to 10^-8 Torr. All these features combined, leads to an unparalleled operator experience.

Ai Vacuum specializes in botanical refinement equipment. This is a subsidiary of Across International, an industry leader in manufacturing heat treatment, material processing, and laboratory equipment. Their mission is to empower those advancing science by offering high-quality equipment and the best customer support.

System highlights and advantages.There are many advantages to using Prescott 1000.