Financial experts, authors and public speakers Cora Cristobal and Sunil Tulsiani have combined forces to bring ‘The Science of Getting Rich’ into the new century, creating a practical manual for people who want to create wealth in the 21st century. 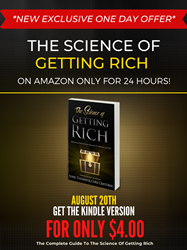 Highly respected authors and public speakers Cora Cristobal and Sunil Tulsiani have combined forces to bring ‘The Science of Getting Rich’ by Wallace Wattles right into the new century. Combining their expertise in creating wealth, they have simplified the lessons in the original book and enhanced them with modern ideas to bring you a practical, tested, and proven methodology for the creation of wealth. When Sunil Tulsiani became Cora Cristobal’s mentor, her life turned around. She credits this change in her fortunes to her mentor and to the book to which he introduced her, The Science of Getting Rich by Wallace Wattles.

While building her life from the foundation up, she applied the teachings of the book. With the support and input of her mentor Sunil Tulsiani, she became an immensely successful international speaker and businesswoman. Cora created the Toronto Women’s Club, which became the platform for her to empower women and help them fulfill their dreams. She built an enviable business empire, and also wrote and co-authored six best-selling and award-winning books with celebrity authors like Dr. John Gray and Brian Tracy.

Sunil Tulsiani went from being a highly respected Police Officer to becoming a successful real estate investor, an entrepreneur and a #1 best-selling author. Sunil has founded the highly respected elite real estate club, Private Investment Club and has trained over 500,000 people alongside of Tony Robbins, Robert Kiyosaki, Brian Tracy, Jack Canfield and many more. He’s referred by the media as “The Wealthy Cop”.

These two enormously successful people have joined forces to bring this book right up to date and provide everyone with a recipe to become rich. With this one book and bonuses, people will have all the information they need to grow their wealth. The Kindle package retails for $20 and will be released today (August 20, 2020) on Amazon. As an exclusive offer for the launch date, the entire wealth building package will be discounted to only $3.99 for anyone who purchases it today (August 20, 2020).

The recent COVID-19 pandemic has decimated the wealth of many people around the world. These harsh lockdowns have meant that the wealth that many families enjoyed has been slashed by falling stock markets, unemployment and business closures. Anyone willing to invest $3.99 in their future by buying this book could put their family back onto the path of wealth creation and ensure that the impact of any similar global disaster can be mitigated.