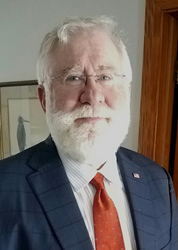 Jim's peerless commitment to serving small businesses comes through in everything he does. -Steve Forbes

After 23 years, The Small Business Advocate Show, founded by Jim Blasingame on November 17, 1997, is still the only syndicated, live weekday program dedicated to Main Street businesses. And since his broadcast has been simulcast globally since January 1998 – six years before anyone called it a podcast – Blasingame is considered one of the Internet streaming pioneer.

"Jim Blasingame is a true professional and one of the most dedicated talk show hosts I’ve seen in my more than 30 years in radio. Congratulations to Jim and his team on another awesome milestone," said Chuck Duncan, General Manager, WCGO Radio, SmartTalk Radio Network and the GAB Radio Network, which has produced Blasingame’s show since 2001.

Internationally recognized as "The Voice of Small Business," Blasingame conducts more than 1,000 live interviews annually with his Brain Trust. From these live interviews, more than 2,600 podcasts are produced annually, which has resulted in a library of over 50,000 podcasts available on-demand, without cost, to small businesses.

"When we began, we wanted to provide Main Street entrepreneurs with the information, resources and inspiration they need to start, run and grow a small business," said Blasingame. "Thanks to the support of our audience, Brain Trust members and corporate partners, we’ve accomplished that goal and continue to deliver multi-media content and resources for small businesses, including a mobile site and a video series."

"Congratulations to Jim on his 23rd anniversary," said Steve Forbes, Chairman and Editor-in-Chief of Forbes Media. "I’ve been a regular on Jim’s show for years and really knows Main Street business. Jim is a great interviewer, and his peerless commitment to serving small businesses and promoting entrepreneurship comes through in everything he does. Well done, Jim."

Blasingame is a prolific writer on small business and entrepreneurship. For over 22 years, his weekly column has been syndicated in newspapers and business journals, plus online publications, including Forbes.com, BizJournals.com, and Nasdaq.com, plus his own weekly ezine. Jim has authored four books. The last two, “The 3rd Ingredient: The Journey of Analog Ethics into the World of Digital Fear and Greed” and “The Age of the Customer: Prepare for the Moment of Relevance,” have garnered seven international awards and sold over 300,000 copies. Blasingame is a high-energy keynote speaker, teaching big businesses how to speak small business as a second language and small businesses how to compete with the big guys.

"We’re very proud of Jim Blasingame’s 23 years as the world’s leading small business expert and of our partnership with him for the past 16 years," said Jay Mincks, Executive Vice President of Sales and Marketing at Insperity, Blasingame’s presenting sponsor. "As a thought-leader, Jim has helped countless Main Street entrepreneurs start, run and grow their businesses; as a futurist he helps them see a little farther over the horizon, all of which aligns perfectly with Insperity's mission. Keep it going, Jim."

For his work and leadership on behalf of small business, Jim has received national awards from the U.S. Small Business Administration, Association of Chamber of Commerce Executives, Association of Small Business Development Centers, FORTUNE Small Business magazine, and New York Enterprise Report. TALKERS Magazine identified Blasingame as one of the most important radio talk show hosts in America.

The Small Business Advocate® Show is the flagship brand of the media company Small Business Network, Inc. (SBN), of which Blasingame is founder and president. SBN produces and distributes multi-media small business resources worldwide. Insperity is the presenting sponsor of all SBN media.

The SBN Website is SmallBusinessAdvocate.com. The Small Business Advocate®, The Age of the Customer® and The 3rd Ingredient® are registered trademarks of Small Business Network, Inc.