The Social Security COLA Will Be Lower in 2020, But Retirees Say Prices Are Going Up Faster Than COLA According to The Senior Citizens League

According to an estimate from The Senior Citizens League (TSCL), the Social Security cost of living adjustment (COLA) will be about 1.6 percent in 2020. That’s considerably lower than the 2.8 percent that retirees received in 2019. Retirees who depend on Social Security COLAs say they haven’t noticed lower prices over the past 12 months. 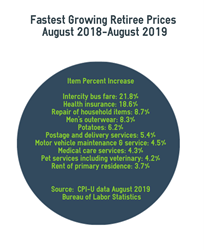 “Some of the fastest growing costs of retirees, such as Medicare premiums, don’t show up in the COLA at all, because the CPI-W does not include that expenditure,” Johnson points out.

Another retiree wrote, “My wife and I are both octogenarians and Social Security is 90% of our income. The remaining is a fixed amount. Over the last three years from 2016 to 2019 our Social Security income increased by a total of about $150 per month. But during that same three-year period our Medicare premiums increased by 29 percent or $61 per month. Further, our Medicare Supplement insurance premiums increased by almost 15 percent or $68 per month. That left us with an increase in our income-over three years-of about $21 per month. It’s difficult to determine how an income increase of seventy cents a day over a three-year period helps us to maintain the status quo.

Consumer price data through August does show the cost of health insurance for all urban consumers went up — a painful 18.6 percent —and is one of the fastest growing items for all consumers. Yet that cost alone does not seem to be driving the rest of the CPI, or the COLA up. So why will it be so low in 2020?

A big factor is the consumer price index that’s used to calculate the annual benefit increase. That index, called the Consumer Price Index for Urban Wage Earners and Clerical Workers (CPI-W), doesn’t account for the spending patterns of older retired people, but rather is tied to the market basket of younger urban workers. According to the BLS, the CPI-W only represents only 28 percent of the total U.S. population, and excludes households with no one in the labor force —such as retirees.

Older adults, however, spend more on healthcare and housing, two categories of costs that tend to grow much faster than overall inflation. Younger workers spend more on transportation costs but, despite a recent spike in the price of crude oil, gasoline prices in the U.S. are still lower than this time a year ago. Prices of TVs, smart phones and computer software that make up a bigger portion of the budget for younger households, have dropped significantly.

“Some of the fastest growing costs of retirees, such as Medicare premiums, don’t show up in the COLA at all, because the CPI-W does not include that expenditure,” Johnson points out. “Growth in out-of-pocket prescription drug costs and Medicare premiums are two of the biggest cost challenges that most retirees have,” Johnson notes.

If actual costs grow faster than the COLA raises benefits, the purchasing power of benefits erodes, and retirees need to spend more of their savings, go into debt, or wind up going without essentials including food and medicine. A study released earlier this year by The Senior Citizens League found that Social Security benefits have lost 33 percent of buying power since 2000, because typical retiree costs are growing faster than the COLA increases benefits.

To protect Social Security benefits from an erosion in buying power, The Senior Citizens League supports legislation that would strengthen the COLA. To learn more, visit http://www.SeniorsLeague.org.
###

Chart of Growth of Expenses