Numerous Professional Celebrity Impersonators from the Popular, Long-Running, Annual Convention Chosen to Lend Their Lookalike Talents to the New Attraction 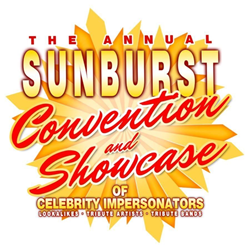 Visitors of the newly open National Enquirer Live museum in Pidgeon Forge, Tennessee are in for a star-studded surprise with celebrities like “Lady Gaga”, Michael Jackson”, “Cher”, “Elvis”, “Katy Perry”, “Dolly Parton’, “Jack Nicholson” and numerous others there to greet them. The impressive, highly resembling faces and voices featured in the interactive “Celebrity Gossip Room” attraction found inside the museum come from the popular, long-running Sunburst Convention & Showcase of Celebrity Impersonators held annually in Orlando, Florida. Their entertainers lend their talents to talking portraits of the celebrities, which come to life to interact with museum guests.

“We are thrilled to have our entertainers selected to be featured in the National Enquirer Live,” says the Sunburst Convention & Showcase of Celebrity Impersonators Producers Greg M. and Jackie Thompson. “Sunburst is the premier event of the year for celebrity tribute artists, impersonators and lookalikes. We attract professionals and up-and-comers from around the world who gather to network and perform for industry professionals, the public and each other, and so it’s a huge honor for our Sunburst family to be selected to appear in the national attraction, and it truly shows the booking power of Sunburst.”

Each year, over 100 of the world’s best professional celebrity impersonators, lookalikes and tribute artists fly, drive and cruise into Orlando for the Sunburst Convention to gather, mingle, network, educate themselves and have an unforgettable time. They are joined by numerous talent buyers, talent agents, producers and meeting planners from all over the country who are invited to watch the imitators perform live and make a lasting impression. Sunburst features themed parties, an awards banquet, promotional room and performance showcases open to the general public with tons of photo opportunities, so even more spectators can enjoy the unique, fun and one-of-a-kind entertainment Sunburst has to offer.

See the Sunburst entertainers in action at the National Enquirer Live located at 2115 Pkwy, Pigeon Forge, Tenessee 37863. The Sunburst Convention & Showcase of Celebrity Impersonators returns for its 17th year to The Florida Hotel & Conference Center located at The Florida Mall in Orlando, Florida from Wednesday, August 28 through Saturday, August 31, 2019. For more information on registering as a celebrity impersonator or guest for the performance showcases, visit http://www.SunburstConvention.com.
###