The Tabernacle Choir and Orchestra at Temple Square announce the release of their new, movie-themed album on May 22. When You Believe: A Night at the Movies features some of the biggest songs from the biggest films. 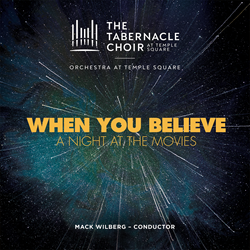 When You Believe: A Night at the Movies Album Cover

"“We hope to showcase the power of this music to inspire and to encourage us."

Choir music director Mack Wilberg has assembled a repertoire that will appeal to a broad range of moviegoers while still being consistent with the Choir and Orchestra’s mission to uplift, inspire, and help people feel closer to the divine. The result is a new extended play (EP) album entitled When You Believe: A Night at the Movies.

When You Believe is a five-track EP that will be available for streaming, download, and physical purchase beginning May 22. Tracks include “Main on End,” from Avengers: Endgame; “I’ll Fly Away,” from O Brother, Where Art Thou?; “Eatnemen Vuelie (Song of the Earth),” inspiration for the theme to Frozen; “When You Believe,” from The Prince of Egypt; and “Duel of the Fates,” from Star Wars, Episode I: The Phantom Menace. The first single from the new album, “Duel of the Fates,” from the Star Wars franchise, is available to stream now on Spotify.

“The Choir and Orchestra have a longstanding tradition of performing inspirational music from the Broadway stage and the movies,” Wilberg said. “We hope to showcase the power of this music to inspire and to encourage us. The title When You Believe captures that concept of building faith and shows why it was fitting for the Choir and Orchestra to record this music. This music can touch our souls in a very unique way. We also hope this recording will open doors to those who have yet to experience the music of the Choir and Orchestra.”

This album is also the first to feature the Choir’s new logo. The recently revealed mark follows the Choir’s name change announced in 2018 and hearkens to its heritage by featuring the iconic organ pipes found in the Salt Lake Tabernacle but in a new, modern way. The new logo visually represents the work of the Choir and Orchestra to bring people closer to the divine through music.

The Utah-based Choir is one of the oldest and largest in the world and has performed before presidents and royalty, sold millions of records, won scores of awards, and enthralled audiences in more than 28 different countries. The Orchestra was formed twenty years ago and accompanies the Choir on all the Choir’s recordings and major performances. The Choir’s weekly broadcast of Music & the Spoken Word is the one of the longest-running programs in broadcast history and will begin live broadcasts again following the end of the COVID-19 restrictions.

The album will be available at the following links: