The Top Streaming Services and TV Shows of April 2021, According to Watchworthy Data

Ranker’s TV Recommendation App Watchworthy Reveals What, Why, and Where Audiences Were Streaming in the Month of April 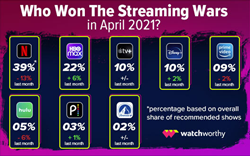 "All that rich, first-party data gives us unique insight into the streaming wars, including correlations and optimization for advertisers, studios, and brands seeking a better understanding of consumer content behavior" -CEO Clark Benson

Ranker, known as the world’s leading publisher for fan-powered rankings on just about everything with over one billion votes, just announced the Top Streaming Networks and TV Shows for the month of April 2021 according to users of the TV recommendation app Watchworthy.

It’s one thing to know how many people are sitting in front of how many televisions to watch however many shows at any given time. But what that doesn’t tell you are the ideas about the shows streamers are watching, about why they’re watching it, about how it’s similar to or different from the dozens of other shows they love. And the only place where one can find cold, hard data on all those opinions is Watchworthy.

By relying on the Watchworthy algorithm, which itself relies on the “Likes” and “Dislikes” of Ranker and Watchworthy users, ‘Worthy’ scores give a sense of not just what’s popular, but what’s trending in TV today. The data from aggregated Worthy scores therefore tell which shows are most rapidly growing their fanbase heading into Summer 2021, as well as the platforms where those shows are available to stream.

“The more streamers continue to download Watchworthy for free and create personalized ‘Watchlists’, the more we get a deeper understanding of the streaming-verse,” said Clark Benson, CEO and founder at Ranker. “All that rich, first-party data gives us unique insight into the streaming wars, including correlations and optimization for advertisers, studios, and brands seeking a better understanding of consumer content behavior.”

STREAMING SERVICES
Over the month of April, Watchworthy tracked each time a show received a Worthy score of 80% or higher, then organized all those shows according to Networks. The resulting analysis allowed us to determine which network’s content is being recommended to the most users.

Netflix Is Still #1
Though Netflix is down this month, a significant silver lining for the streaming giant is the sudden drop of Disney’s The Mandalorian from the #1 spot. The Witcher was the most “Watchworthy” show of the month, suggesting the fantasy series is building a broader audience ahead of its second season. Newcomer Bridgerton indicated that it could become a major source of strength for Netflix by landing in the Top 20 its very first month on the Watchworthy leaderboard.

#2: Return of the ‘Max’
After a disappointing March, HBO Max pushed back into a more competitive position in April thanks in large part to the continued strength of Euphoria, though The Outsider and Watchmen also played major roles in the service’s performance. Euphoria outperformed other soapy teen dramas like Outer Banks, while Watchmen did better than other superhero ensembles like The Umbrella Academy and The Boys. The reason? HBO’s branding is synonymous with prestige TV. Even though many of its original shows have themes in common with competitors, viewers trust that HBO will be able to deliver the highest possible quality of whatever genre of television they’re seeking.

#3: Apple TV+’s Triumphant Entry
Behind Apple TV+’s sudden appearance on the leaderboards is The Morning Show, the sixth most Watchworthy show in April. It’s hard to say why exactly this critically lauded 2019 drama did so well this month, though it could be that anticipation for the show’s second season is building — some reporters observed that many of the 2021 offerings Apple teased in a trailer during a TCA press tour in February have already been released. But five other shows on Apple contributed to its April position on the Watchworthy leaderboard, including For All Mankind, Home Before Dark, and Ted Lasso.

#4: Disney+ Continues to Build Momentum
Disney’s share of high recommendations technically shrank in May compared with March, but it lost third place to Apple by .001%, even though The Mandalorian fell from #1 to #12 this month. WandaVision, The Falcon and The Winter Soldier are steadily building their audiences month over month. As anticipation builds for Loki, we could see Disney+ become more competitive with Netflix and HBO Max in the coming months.

#5: Amazon Continues to Slide
The entry of two new competitors to the leaderboards this month made things harder for all the streaming services who were already there, which partially explains Amazon Prime Video’s continued struggles. But despite the encouraging numbers put up by Upload, Prime’s original dramedy series, it seems Amazon’s streaming service has simply replaced the crutch it had in The Boys with another. Prime Video needs to build a stable of consistently engaging content rather than rely on one top performer each month.

#6: Hulu Seeks More Buzz Around Originals
Hulu draws plenty of subscribers with its library of licensed content, but many of its most recent originals are still growing their audiences. Only some episodes of those shows that won high recommendations this month — Prodigal Son and Zoey’s Extraordinary Playlist — are available on Hulu, while both series are available in their entirety to subscribers of other platforms. The only Hulu original that registered a statistically significant number of Watchworthy recommendations in April was Little Fires Everywhere. Despite a fourth season of Handmaid’s Tale, newer original content like Solar Opposites and The Hardy Boys just isn’t getting the attention Hulu needs to compete.

#7: Peacock Is Sitting in Seventh Place — but for How Long?
Though Zoey’s Extraordinary Playlist did climb up the Watchworthy leaderboards to #11 this month, the fact that it’s Peacock’s only performer meant it didn’t translate into big results for the streaming platform. But Zoey’s growing share of recommendations, the much-hyped release of original shows like Girls5Eva and Rutherford Falls, and the dwindling numbers put up by established competitors Hulu and Amazon could combine to bring Peacock to a better place by the end of May.

#8: Paramount+ Premieres
So far, Picard and B Positive are the only shows that have registered as “Watchworthy”. It seems like Paramount’s strategy has been to absorb existing, popular shows, so it’s unclear whether or not the streaming service will be competitive in terms of more recent offerings in the months to come.

TV SHOWS
Below is a list of the Top 20 TV shows and streaming platforms given the highest Worthy scores to Watchworthy users throughout the month of April 2021:

To learn more, please visit the data story Who Won the Streaming Wars in April 2021, including Ranker’s Insights Scoop blog to find out more about Watchworthy.