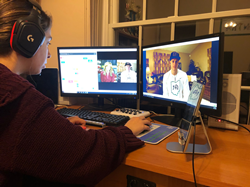 The VCC provided technology and video call expertise to deliver dozens of interviews for the NFL draft. Here a call producer works from home to facilitate a live interview with first pick Joe Burrow.

"The NFL draft was easily among the most complex, virtual live events ever produced...We are thrilled to be a part of the team that helped NFL Media take on the challenge of rewriting traditional broadcast rules to deliver this spectacular event to millions of fans." - Larry Thaler, CEO, The VCC

The Video Call Center (VCC) today announced that it assisted NFL Media in providing millions of fans with the opportunity to see and hear live from leading prospects as they were selected during the broadcast of the 2020 NFL Draft. The VCC provided the technology platform, coordination, and expert video call producers needed to make possible the dozens of compelling, personal interviews that originated from the prospects’ homes.

NFL Media Production Executives contacted the VCC with only about two weeks remaining before the start of NFL Draft 2020, which aired April 23 - April 25. In that short interval, the VCC worked with NFL Media to define a production workflow for the broadcast based on the VCC’s patented video call production system.

The VCC helped to prepare and test smartphone-based technology kits that were delivered by the NFL to 58 of their top prospective players. The VCC then worked directly with the prospects’ family members to optimize two locations in their homes that would appear on air, overcoming bandwidth limitations, framing and lighting the shots, and removing branded material from the scene. The VCC also worked alongside teams at NFL Network, ESPN, and ABC to optimize and rehearse for the live production of the 2020 NFL Draft.

One of the advantages the VCC provides is that non-technical TV guests such as the prospects and their families can easily appear live on television, at high quality, using standard smartphones and everyday video calling apps. The VCC’s patented technology and processes help to overcome the bandwidth limitations and fluctuations typical in people’s homes or public spaces. This makes it possible for the VCC to establish lag-free, two-way communication between interviewers and their guests so they can see and hear each other in real-time for natural, smooth-flowing interaction.

The ability to make adjustments on the fly was critical to the NFL Draft 2020 broadcast, as the prospects’ homes were lively and dynamic settings where excited family members and friends competed for the available bandwidth and the physical spaces. VCC call producers made optimizations right up to the moment of air to ensure quality coverage. In most cases, the VCC had only seconds between the time the prospect moved to their interview camera and the delivery of a high-quality feed to the NFL’s broadcast partners at NFL Network, ABC, and ESPN.

VCC CEO Larry Thaler said, “The NFL draft was easily among the most complex, virtual live events ever produced. It relied heavily on a new class of IP-based broadcast television technologies and services, including those pioneered at the VCC, that were designed to support the evolving needs of broadcasters and other producers of the highest quality content. The Video Call Center has been at the forefront of a revolution that elevates the creativity, flexibility, and economics of television with location-agnostic workflows. We are thrilled to be a part of the team that helped NFL Media take on the challenge of rewriting traditional broadcast rules to deliver this spectacular event to millions of fans.”

For more information about the VCC and to see examples of its work visit http://www.thevcc.tv.

About The Video Call Center, LLC
The VCC is a technology and production services company devoted to handling large numbers of IP Video remotes-by-smartphone and putting them on the air through patented caller acquisition technology, workflow and assistive automation (US patents #8,767,031, #9,654,731, China patent #ZL 201380050976.3, and other patents pending). The VCC licenses its software and provides caller acquisition and production services. VCC has helped clients produce hundreds of programs for broadcast and the web, supporting Major League Baseball, Sony/TEGNA, Fox TV Stations, Discovery, Fox Sports Networks, TLC, and many others. Examples of video caller television programs and complete information about the VCC are available at http://www.thevcc.tv.