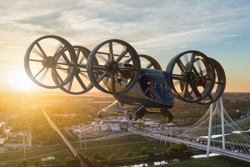 The Bell Nexus Air Taxi will be featured in the keynote at the VFS Electric VTOL Symposium later this month.

Since Bell flew its first helicopter in 1943, the company has delivered more than 35,000 helicopters and tiltrotor aircraft. Bell is now combining their deep understanding of vertical flight technology with hybrid-electric power to create a disruptive new VTOL air taxi for everyday use.

The Vertical Flight Society has been strongly supporting the development of electric VTOL aircraft since initial flights were made in 2011. Since then, innovators both within and outside the aerospace industry have seized the opportunity to leverage advances in electric motors, batteries, hybrid-systems, control systems, low cost manufacturing and autonomy that have been developed by the automotive, aerospace and consumer unmanned aircraft systems (UAS, aka “drones”) industries. These technologies have revolutionized the creative design space for VTOL innovators, resulting in an incredible breadth and depth of new electric and hybrid-electric VTOL aircraft configurations that don’t resemble the helicopters that have dominated vertical flight for the past 75 years.

The Bell Nexus builds on the company’s rich heritage, including its experience developing and producing (with Boeing) the world’s only operational tiltrotor VTOL aircraft, the V-22 Osprey.

The Bell Nexus uses a Safran turboshaft-based hybrid propulsion and drive system to produce the electrical power for six propellers, each housed in a tilting duct — three on each side of the aircraft cabin. The use of electrical power enables revolutionary configurations that can be much quieter and environmentally friendlier than conventional helicopters. Although batteries have much lower energy density than liquid fuel, the Nexus offsets this by cruising on an airplane wing — as well as lift generated by the six ducts — for extended operational range. The Safran turboshaft engine, which is housed on the aft fuselage above the cabin, provides additional power for vertical takeoffs and landings, as well as extended range, like a hybrid-electric automobile. The V-tail configuration reduces the noise of the engine exhaust when it is running.

Bell is also leveraging the legacy of its experimental X-22 VTOL X-Plane, which was successfully flown from 1966 to 1988, but the complexity of its four turboshaft engines mechanical driving four tilting ducted propellers via 11 gearboxes was too challenging for the Bell X-22 to go into production.

“Fifty years ago, many innovative VTOL designs were rejected because of the complexity of their manual flight controls linkages and propulsion drive systems, but electric power today enables ‘fly-by-wire’ computerized flight control systems as well as ‘power-by-wire’ energy transmission,” said Hirschberg. “Electric power has opened up an exciting new design space for vertical flight and the Bell Nexus takes full advantage of these advances.”

In addition to Safran, the Bell Nexus team also includes Electric Power Systems (EPS), Thales, Moog and Garmin, who are collaborating on Bell’s VTOL aircraft and Urban Air Mobility (UAM) solutions. The vision of UAM is a safe and efficient system for air passenger and cargo transportation within urban areas, including package delivery and other services via UAS.

The Vertical Flight Society will host its 6th Annual Electric VTOL Symposium in Mesa, Arizona, on Jan. 29-31, 2019, where Michael Thacker, Bell’s Executive Vice President of Technology and Innovation will deliver the keynote address on Nexus and the company’s other autonomous and electric VTOL aircraft; this will be the first opportunity for Bell to present its Nexus air taxi to an aerospace audience. The Symposium will be held in conjunction with the 8th Biennial Autonomous VTOL Technical Meeting. The combined event features more than 100 speakers on the promise, progress and challenges of autonomous and electric VTOL aircraft. More information is available at http://www.vtol.org/eVTOL2019.

VFS is the global non-profit society for engineers, scientists and others working to advance vertical flight. For 75 years, the Society has led technology, safety, advocacy and other important initiatives, and has been the primary forum for interchange of information on vertical flight technology.

VFS was founded as the American Helicopter Society in 1943 by the pioneers of the helicopter industry, who believed that technological cooperation and collaboration was essential to advance vertical flight. Today, history is repeating itself with the Society playing a similar role in helping to advance today’s Electric VTOL Revolution.