The War Against Artificial Intelligence And Mass Unemployment – Do ‘Nootropic’ Brain Supplements Hold The Answer?

Martin Brison, Editor of brain supplement site 'BrainPillReviews.com' writes that as Artificial intelligence brings automation to a number of industries, it will devastate the job market as we know it. It is estimated that almost half of US citizens will need to find a new job and Nootropic ‘brain steroids’ might be the only hope to keep up with the change. 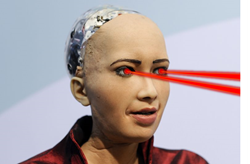 Sophia is coming for you... Well, your job at least!

“Artificial intelligence will soon leave people displaced and needing to find a new way to put food on the table and it will likely be you.” - Archie Marks, creator of Nootropic supplement Nitrovit grimly states.

It’s difficult to name any of the large tech companies that aren’t investing time and energy into creating artificial intelligence technology. It’s already a big part of our lives, and with the market value set to increase from $9.5 billion to $118.6 billion by 2025 , it’s about to take over our lives.

Uber’s self-driving car ran 6 red lights near-missing multiple people on the crossings. A Tesla Model 3 driver was killed in an accident while using auto pilot mode. Sophia, a life-like android developed by Hanson Robotics, declared plans to destroy humanity whilst speaking on stage at the SXSW technology conference. The list of AI horror stories continues to grow every day.

But where does this leave us? Yes, we now enjoy our cars driving themselves. Yes, Alexa is on hand to order movie tickets. And Yes, our fridges can order the grocery’s. But what are the consequences of allowing artificial intelligence to take over more and more of our lives? And how can we keep up with the change?

“There certainly will be job disruption. Because what’s going to happen is robots will be able to do everything better than us... I mean all of us.”
– Elon Musk

Two Oxford academics, Carl Benedikt Frey and Michael Osborne, agree with Elon Musk and in their paper estimated that 47% of American jobs are at risk of being lost to automation from artificial intelligence . The world economic forum has a slightly more optimistic view and predicts that artificial intelligence will displace 75 million jobs while generating 133 million new ones by 2022 . Finally, the Mckinsey Global Institute predicts that between 40-160 million women will need to transition to higher-skilled roles by 2030 .

The exact figures are uncertain. However, one thing everyone agrees on when predicting the impact of artificial intelligence on the job market is that a large number of people are going to be out of a job. Once AI automation takes over industries, the people left behind will be required to learn a new profession and new skills, FAST. Furthermore, AI does not discriminate. Chinese venture capitalist and AI expert Kai-Fu Lee predicts:

“AI will increasingly replace repetitive jobs. Not just for blue-collar work but a lot of white-collar work.”
– Kai-Fu Lee

With millions of people predicted to be replaced by artificial intelligence by as early as 2022, US citizens are taking daily brain vitamins or ‘Nootropics’. Nootropics are supplements proven to enhance, improve, and optimize the brains ability to focus, learn, recall stored information, and remain motivated and productive… exactly what’s needed for the big change ahead. Archie Marks, the founder of leading Nootropic supplement Nitrovit comments:

“We can already see how artificial intelligence is automating so many processes, turning jobs into software. I really don't think we are ready for the mass unemployment that awaits so many of us. The new required skills will be those AI lacks – Ingenuity, morality, confidence and rapport building skills, big picture thinking and creativity among others – And I believe Nootropics can help with that.”
– Archie Marks

When looking for supplements that are going to be effective at improving the brains ability to learn new skills, it is important to look out for specific Nootropics that aid accelerated learning. Noopept, Alpha GPC and Phosphatidylserine are all respected for their ability to accelerate learning while producing other benefits that have a compounding effect, improving a variety of cognitive abilities.

From surgeons to stage performers and from CEO’s to those with a hectic schedule, Noopept can help with the extra motivation and productivity required to cope with these stresses.

Alpha GPC – is a type of Choline that is widely considered as the godfather of Nootropics. This natural nootropic works by increasing the production of acetylcholine in the brain, which has a direct link to attention, memory, arousal and motivation.

Alpha GPC and other Choline based Nootropics have been used nationwide by students to cheat their exams by drastically improving their memory recall and ability to focus. Musicians and martial artists using Nootropics have been able to shave years off the required time to master their fields, by utilising the additional motivation and ability to recall learnt patterns faster than the average joe.

Phosphatidylserine - is a fatty-like substance that protects and covers every cell in the body. It has been shown to improve language skills, attention and memory formation, and is popular as a daily supplement among older people who want to stay sharp and switched on in the fast-paced world of today.

As AI learns and grows at an unprecedented rate, the skills we will need to compete may seem complex. Thankfully, acquiring a new skill or learning to code become manageable with Nootropics. Website building and software development, video and photography, and even creative writing, opens the doors to making money online, freeing individuals from the gloom of unemployment.

While governments and corporations battle over the regulation of artificial intelligence markets, the world gets closer to an unprecedented leap in AI technology. It will accelerate expert forecasts of the impact of AI and the increased automation will lead to a mass loss of jobs. Therefore, all of those affected will need to learn new skills quickly.

It is the responsibility of global leaders to protect society from such a catastrophic event. However, with nobody really knowing if the next technological leap is still years away, or in fact taking place tomorrow, Nootropics users are taking things into their own hands.

There’s no denying we’re facing big changes. However, Nootropic supplements like Nitrovit could help us stay relevant and valued in a rapidly evolving, and increasingly selective job market.

With constant disruption from AI let’s hope nootropics can keep us mere humans in the game.

If you would like to find out more about other Nootropic ingredients and how they can help you, head over to Neuro Laboratories website for an in-depth look into how they work.