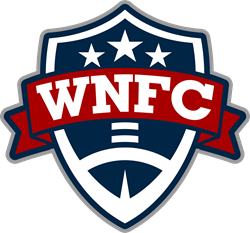 As a woman of color, I have always had to reimagine the world in a way that made it more inclusive to me. It is a great honor to have women’s football and the WNFC selected as a recipient of this grant.

The Women’s National Football Conference (WNFC) was among fifteen women led organizations in sports that were awarded a grant created by adidas + IFundWomen as part of their initiative created during International Women’s Day to jumpstart the seeding efforts and help to break down the barriers of funding for women entrepreneurs. Continuing their commitment to help the world reimagine sports, the adidas + IFundWomen partnership “supports emergent women founders who are creating change in the sports industry by providing them the tools for success. Through access to funding and expert coaching, [the program] jump-starts the next wave of women founders who are redefining sport.”

The WNFC is high-quality women's football-fueled by passion and a plan to ultimately deliver professional women's tackle football to the world. Players in the WNFC are offered state-of-the-art protection on the field and ample opportunities off it through partnerships and alliances developed by the WNFC leadership team. Co-Founded by former NFL Coaching Intern/Team USA (USA Football) Gold Medalist, Championship coach, Odessa Jenkins, and managed by an all-female leadership team, the WNFC features 20 teams, playing a 10-week Spring season, broadcasting nationally; and culminating with the IX Cup Championship game honoring women in sports.

About Women’s National Football Conference
The Women’s National Football Conference (WNFC) is a groundbreaking organization that exists to create and foster an environment for female athletes to sustain healthy lifestyles through playing, coaching and participating in American Football at the highest level. As a premier professional women's tackle football league, WNFC plays 11-on-11 full padded American tackle football. Sponsored by adidas and Riddell Sports, the WNFC has over 1,000 athletes and coaches across 17 states which makes up 20 teams with thousands of fans. The WNFC was started in 2019 in order to bring the sport of women's tackle football to the masses. To learn more, follow WNFC on Instagram and Twitter at: wnfcfootball. Visit: https://www.wnfcfootball.com/

“As a woman of color, I have always had to reimagine the world in a way that made it more inclusive to me. It is a great honor to have women’s football and the WNFC selected as a recipient of this grant. As women, we work for validation and support in all aspects of industries, but none has proven to be more difficult than the sports industry. Yet, our world is changing, and now is the time for sponsors and partners to show that they are ready for change by investing in female led, sports businesses. I am proud that adidas was willing to take the first step, and I look forward to many other brands following their lead. It’s time to put WNFC football on the world stage.” – Odessa Jenkins, CEO, Women's National Football Conference

Jenkins is a former US Gold Medalist, Hall of Fame, National Championship football star, Coach, Tech Executive and CEO of the Women’s National Football Conference. With a distinct focus on women in sports, Jenkins has proven to be a master at navigating success and producing winners. Whether it be leading as the CEO of the WNFC, Coach of the undefeated Texas Elite Spartans, VP in a tech firm, or formerly navigating NFL locker rooms (Bill Walsh Coaching Intern), she has proven ability to thrive. Known mostly for her accolades as a former tackle football player and record as a coach, Jenkins remains laser focused on delivering what she calls “the final frontier of sports” - women’s tackle football to the world. Jenkins believes that through sports, she can transform the world, and she wants the world to continue to transform for women and girls.

Through the crowdfunding campaign, supporters can donate to the Women’s National Football Conference to help launch the Women's Tackle Football Show which will allow them to continue to amplify the sport and programming as well support the many initiatives created by WNFC in the communities they play. To learn more about the Women’s National Football Conference and to donate to their campaign, visit: https://ifundwomen.com/projects/womens-tackle-football.