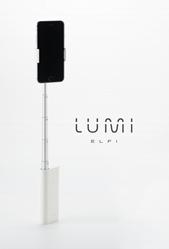 Kinofi hopes that the Lumi Elfi will help change the narrative of selfie sticks and to bring a new level of creativity for content creators.

After a successful launch for the Lumi Mark series, Kinofi has successfully hit its funding goal for the Lumi Elfi on Kickstarter. The beginnings of Lumi Elfi originated from the boom of smartphone accessories. With the meteoric rise of social media platforms such as Facebook, Instagram, Snapchat, and now Tik Tok, Kinofi sought out to redesign the selfie stick and to include versatile features for its users.

Kinofi hopes that the Lumi Elfi will help change the narrative of selfie sticks and to bring a new level of creativity for content creators. Camera and smartphone accessories play an essential role in a creator's style which is why the essence of Lumi Elfi will play a big role in helping amateur content creators reach stardom. This sentiment is currently being reflected by the success of its Kickstarter campaign. Some of the most popular features of the Lumi Elfi include the following:

The Lumi Elfi app is also available for download today on both the Google Playstore and Apple App Store.

Lumi Elfi's Kickstarter campaign is scheduled to end on June 18th, 2020 PST. In order to take advantage of the limited number of Early Bird Rewards, backers are encouraged to submit their pledge as soon as possible. Any journalists, editors or social media influencers interested in receiving a sample for review are encouraged to submit an inquiry through the Kickstarter page.