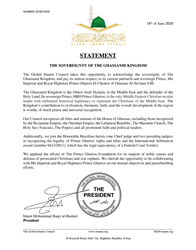 The general public has no idea that the Middle East had a long reigning mighty Christian dynasty that flourished until very recently.

The Ghassanid Kings, emperors and princes ruled several Middle Eastern regions, from 220 CE until the mid 18th century, a duration of over 1500 years. The Sovereign Imperial and Royal House of Ghassan is the oldest active Christian Royal House in the world, the sovereigns ruled over the largest territory for the longest period; more than any other Arab Dynasty.

The recognitions are from the highest governmental levels also coming from the leading scholars on their respective fields.

Some of the noteworthy recognitions:

Now, during the commemorations of the dynasty’s eighteen centuries anniversary, another significant historical recognition was achieved, the world’s largest non-governmental body of Muslim leaders (the only one in the globe composed by leaders from both Sunni and Shia traditions) has recognized the sovereignty of the Royal House of Ghassan and its Dynastic head.

The Global Imams Council is the world’s first and largest international non-governmental body of Muslim religious Leaders from all Islamic Denominations and Schools of thought with a rapidly growing number of over 1,000 leaders worldwide.

The diverse council of Imams advocates for peaceful coexistence, tolerance, mutual respect, and the building of bridges with all religious communities, along with tackling extremist ideologies and militant Islam (Islamism).

The council’s Imams is composed by established and prominent representatives of the holy Islamic Seminaries and oversees the affairs of Muslim communities worldwide on a daily basis.

The council is the first Imams Council to provide females with administrative roles, and currently serves almost 1,000 communities, Mosques, Islamic Centers, Schools, and Charitable Organizations around the world.

The solemn decree issued by the eminent council recognizes the sovereignty of the Ghassanid kingdom and all its realms and titles under the global leadership of HRH Prince Gharios El Chemor of Ghassan, “de jure” Al-Numan VIII.

Last year, the Royal House of Ghassan has released “The Christian Kings of the Middle East” a feature length documentary presenting the history of the dynasty with the Special participation of the world’s leading scholar on Middle Eastern Royal Succession, Prof. Joseph Kechichian, PhD, His Most Reverend Paul Matar, the Maronite Archbishop of Beirut amongst others.