The Artisan Group® will be a sponsor at GBK’s 2016 Golden Globes Celebrity Gift Lounge, which takes place January 8-9, 2016 at an exclusive location in Hollywood, California. The Artisan Group’s exhibit is a highlight for those attending the award show gift lounge circuit and the handcrafted arts collective is prepared to exceed expectations with an engaging display of showcase pieces and celebrity and press swag bags filled to the brim with member-created artisan goods. 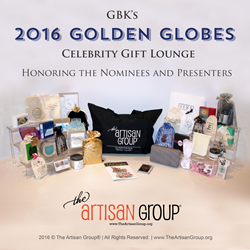 The Artisan Group is thrilled to sponsor GBK's Golden Globes Celebrity Gift Lounge for the fifth year in a row.

The Artisan Group® (http://www.theartisangroup.org) will be present at GBK’s Golden Globes Celebrity Gift Lounge honoring the Nominees and Presenters of the 2016 Golden Globe Awards, with a star worthy selection of luxury handcrafted goods prepared by its members especially for attending celebrities, VIPs and select members of the press and media. The Gift Lounge takes place January 8-9, 2016 at an exclusive location in Hollywood, California.

The Artisan Group’s swag bag this year is valued at over $1,100.00 and includes an assortment of artisan jewelry; bath and body products; hair accessories; clutches; designer stationery; nail polishes; pet products; fine art photography and other handcrafted items. The Artisan Group will also be gifting GBK’s 2016 charity beneficiaries, to be announced in the coming days.

“The Artisan Group is thrilled to sponsor GBK’s Golden Globes Celebrity Gift Lounge for the fifth year in a row,” said The Artisan Group founder Valerie Guerrero. “Our members look forward to this event for its incredible guest list and the high level of energy and enthusiasm. We are excited to visit with everyone and share the stories behind these incredible handcrafted goods.”

At GBK's 2015 Golden Globes event, The Artisan Group members gifted best actress winner Gina Rodriquez (“Jane the Virgin”) and Best Screenplay winners Alexander Dinelaris and Nicolas Giacobone (“Birdman”), as well as cast members from “Boyhood,” “Birdman,” “Jane the Virgin,” “Selma,” “How to Get Away with Murder, “Vanderpump Rules” and “Black-ish,” among many others. The Artisan Group received numerous media mentions, including from HuffingtonPost.com, Spywitness, E! Online and ItsNotAboutMe.tv.

The Artisan Group’s official 2016 Golden Globes Event Guide detailing all participating members is available to view online. See photos of gifted items on Pinterest. To learn more about The Artisan Group’s support of the handcrafted movement, its membership and its charitable contributions, read TAGazine | Vol. 7.

The Artisan Group members come from all over the United States, Canada, and around the world. They represent a varied group of individuals who are dedicated to the handcrafted movement. With the help of The Artisan Group, members gift their products to celebrities, VIPs and members of the press at elite Hollywood and New York City gift lounges.

The Artisan Group also assists with placing member products on popular television shows like Law & Order: SVU, Bones, Jane The Virgin, Modern Family, Baby Daddy, The Vampire Diaries, Days of Our Lives, The Young & The Restless, Girlfriends' Guide To Divorce, Scandal, The Voice, and many others. The Artisan Group® also donates to charitable organizations by providing gift bags that can be auctioned off to raise funds; to date, TAG has helped raise over $10,000 for organizations including Let’s Move Together, One World Foundation and The Joyful Child Foundation.

The Artisan Group also coordinates product placement of its member's handcrafted products on such hit television shows as The Voice, The Vampire Diaries, Days of Our Lives, The Young & The Restless, Modern Family, Parenthood and Scandal, among others. Membership in The Artisan Group is juried and by invitation only.