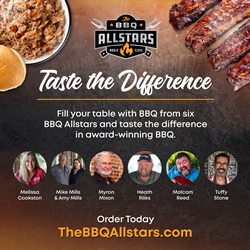 "We thought this would be a good way to combine all of our strengths while bringing barbecue lovers what they really want – a chance to sit down with six different championship ribs and pulled pork dishes to judge for themselves whose barbecue is the best,” said Melissa Cookston

Hot and fast, low and slow, wet, dry, muddy, injected, sweet, hot, savory – how do you like your barbecue?

Barbecue has a language all its own and every barbecue lover has the barbecue pitmaster they look to for inspiration. The one question everyone wants to know is how different barbecue from different pitmasters compares to other pitmaster’s recipes and cooking styles. TheBBQAllstars.com recently launched making it easy for barbecue lovers to order, ship, and finally taste and test different championship pitmaster’s barbecue at one location and with one order.

TheBBQAllstars.com now offers barbecue lovers the chance to taste one or all of featured pitmaster’s barbecue ribs and pulled pork on one website to be delivered in one shipment direct to doors across America. Barbecue lovers can enjoy tasting championship ribs and pulled pork from award-winning pitmasters Melissa Cookston, Myron Mixon, Tuffy Stone, Mike Mills and Amy Mills, Malcom Reed, and Heath Riles.

“We’ve all competed against each other for years and respect each other’s craft. Most of us are in the restaurant, catering, or food service business and as you know COVID-19 has dealt a major blow to our industry. We thought this would be a good way to combine all of our strengths while bringing barbecue lovers what they really want – a chance to sit down with six different championship ribs and pulled pork dishes to judge for themselves whose barbecue is the best,” said Melissa Cookston, the Winningest Woman in BBQ and TheBBQAllstars.com organizer.

TheBBQAllstars.com offers BBQ Allstars combination barbecue packs, lines of seasonings and sauces from each BBQ Allstar, side dishes, and other barbecue items such as wings, Cornish hen, chicken, pork loin, ham, turkey breasts, and brisket. Orders may be placed now and will begin shipping Monday, November 30.

BBQ Allstars combos include the following:

Born and raised in the Mississippi Delta, Melissa Cookston is a trailblazing female food entrepreneur smoking the competition.

Cookston is a 7-time world barbecue champion; owner of Memphis BBQ Company, a successful barbecue restaurant with locations in Horn Lake, Mississippi and Dunwoody, Georgia; owner of Green Tomato Catering Company; BBQ Hall of Fame inductee, prolific food blogger at MelissaCookston.com; author of two cookbooks, “Smokin' in the Boy’s Room” and “Smokin’ Hot in the South;” and a celebrated southern Delta chef who shares her BBQ knowledge and food travels regularly to her fans and friends on her Instagram, Facebook, and Twitter channels.

Recognized nationally from many appearances on national news and talks shows as well as cooking shows and Food Network, Cookston served as a judge on the first season of the 2020 Netflix original “American BBQ Showdown” and season 4 of Destination America’s “BBQ Pitmasters.” Cookston was named one of America’s most influential BBQ Pitmasters and personalities by Fox News in 2015.

As a four-time world barbecue champion, Myron Mixon is the winningest man in barbecue. The chief cook of the Jack’s Old South Competition Bar-B-Que Team, the Mayor of Unadilla, GA, and Chef/Partner in Myron Mixon’s Pitmaster BBQ in Old Town, Alexander, VA. Myron competed in his first competition in Augusta, Georgia, in 1996, where he took first place in whole hog, first place in pork ribs, and third in pork shoulder. Since then, he’s won more barbecue competitions than anyone else in the world.

On TV, Myron is the Executive Producer and host of “BBQ Rules,” host of the “Smoked,” and star of two other hit shows “BBQ Pitmasters” and “BBQ Pitwars” on Discovery’s Destination America and Cooking Channel.

A native Virginian, Tuffy is a Six-time World Barbecue Champion pitmaster, a Barbecue Hall of Fame inductee, an author (Cool Smoke -The Art of Great Barbecue), a former Marine, a French-trained chef, and an occasional reality television star. Dubbed “The Professor,” Tuffy’s legendary precision and obsession with the science of smoke have made him one of the most influential people in barbecue.

As a result of his continued success with the Cool Smoke competition barbecue team and his extensive knowledge of all things barbecue, Tuffy was selected to join Destination America’s show ‘BBQ Pitmasters’ as a judge and co-host.

Tuffy’s life in barbecue continues to take him all over the world, including Kuwait, where he was honored to be able to cook for the troops stationed there. In New Zealand and Australia he taught barbecue classes at Meatstock and most recently traveled to Brazil to teach a masterclass to a large group of passionate Portuguese speaking pitmasters. (Note: Tuffy does not speak Portuguese.)

In late 2019, Tuffy opened The Westover, a casual neighborhood joint in Richmond, Virginia, that serves breakfast and lunch daily and occasionally opens for dinner and live music. He continues to be an owner of a successful off-premise catering company, A Sharper Palate, which recently celebrated 25 years in business.

In the world of barbecue, champion pitmaster Mike Mills is affectionately known as “The Legend.” Called “America’s most-revered barbecue restaurateur,” he’s a four-time World Champion and three-time Grand World Champion at Memphis in May, otherwise known as the Super Bowl of Swine, as well as Grand Champion at the Jack Daniel’s World Invitational Barbecue Cooking Contest. Mike is the most decorated pitmaster in America. He has been inducted into the Barbecue Hall of Fame, named a Pioneer of Barbecue at the Jack Daniel’s World Invitational, and awarded the National Barbecue Association Award of Excellence. He’s the only pitmaster in the world with top-security clearance to board Air Force One and whose oral history was recorded for posterity at the Smithsonian Institute.

Peace, Love, and Barbecue, Mike’s book, co-written with his daughter, Amy, is considered a classic in the genre, was nominated for a James Beard Foundation award, and received the National Barbecue Association Award of Excellence. Their more recent book, Praise the Lard: Recipes and Revelations from a Legendary Life in Barbecue, was published in May 2017.

Amy Mills was raised up on smoke, sauce, and Magic Dust®. Heiress to the 17th Street Barbecue empire, she’s the industry's go-to girl for all things barbecue. Recipient of the coveted Barbecue Heroine prize, she leads 17th Street alongside her dad, Mike Mills. She also runs OnCue Consulting, the only barbecue business consultancy in the world, offering seminars and training in the culinary techniques behind great barbecue. She’s a featured judge on various barbecue shows such as Food Network’s BBQ Brawl, CHOPPED, Food Network Canada’s Firemasters, Best in Smoke, Kingsford Invitational, and Smoked, as well as co-star of the Mills family’s own digital series, Peace, Love, and Barbecue, which debuted on YouTube in 2016.

Peace, Love, and Barbecue, co-authored with her dad, is considered a classic in the genre, was nominated for a James Beard Foundation award, and awarded the National Barbecue Association Award of Excellence. Their second book, Praise the Lard, was published in May 2017.

Most recently, Mills has been restoring a dilapidated building in the center of town into a sauce factory where she will bottle her family’s award-winning barbecue sauces and spice blend, co-pack for others, and breathe life into the local economy. The Factory at 17th Street will also feature a deluxe coffee shop and specialty market and is scheduled to open in December of 2020.

Malcom Reed started competing in barbecue competitions in 2002 and it didn’t take long for his hobby to develop into a full-blown addiction. His love for BBQ inspired him to build HowToBBQRight website, YouTube channel and podcast where he is constantly sharing new BBQ recipes and promoting the BBQ lifestyle he loves so much.
He still competes on the competition BBQ circuit with his team, Killer Hogs.

Heath Riles has established himself as an industry leading expert in both competition barbecue and competition grilling.

Not simply a pit-master in his own right, Heath is also the creator of an award-winning line of barbecue rubs, sauces, marinades and injections. Even those who are not “into” such products or competition barbecue and grilling have gotten to enjoy a taste of what Heath Riles is cooking.

This all occurred as a result of a Bank of America sponsored television commercial which promoted the Bank’s cash-back credit card line and aired on television worldwide for six months. It featured Heath and several members of his former Victory Lane BBQ team “in action” as they prepared for a competition event.