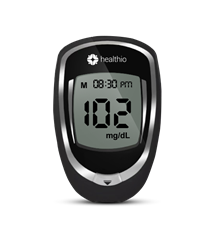 We can now support people who want to manage their pre-diabetic and diabetic conditions… while also enabling non-diabetic customers to gain insights into this critical health vital.

healthio inc, a start-up that provides an artificial intelligence(AI)-based preventive health platform, announced an important expansion of their product – the ability to measure and track blood sugar.

With this addition, healthio enables tracking of all the major vitals. According to healthio’s Chief Product Officer, Sigvard Bore, “We can now support people who want to manage their pre-diabetic and diabetic conditions… while also enabling non-diabetic customers to gain insights into this critical health vital.”

As with other vitals, healthio enables direct transmission of blood sugar readings into its app using the widely available True Metrix Air glucometer. But healthio is providing the flexibility for other users who want to continue using their own glucometer device – they can enter readings manually.

Type 1 & type 2 diabetes are on the rise among youths, and type 2 diabetes is rising for adults across the age spectrum. Being able to measure and track blood sugar is a critical part of any diabetes care plan, and becomes even more powerful when it can be combined with tracking of other issues that are typically seen with diabetes – such as high blood pressure. With healthio you can also measure blood pressure and can track both the vitals in the same app – a key differentiator for healthio compared other devices and apps most of which only allow measuring one or the other.

About healthio inc (http://www.healthio.care): Health & wellness is what happens during the 360+ days per year spent while a person is away from the doctor. healthio empowers individuals to take unprecedented charge of their health management, become smarter about their health-related actions and outcomes, and finally make preventive healthcare a reality.
healthio is a data aggregation platform that leverages individual specific sensor and non-sensor information. healthio allows a user to connect and share insights with a chosen support network, thereby shifting healthcare management to the user and user’s environment and enabling health advocacy via a micro-social network. Overall, healthio leverages machine learning to understand changes in the user’s physiology to either predict or prevent negative health outcomes.