The Wall Street Conspiracy: A Film That Every Person in America Should See

“The Wall Street Conspiracy,” was produced and directed by Kristina Leigh Copeland and presented by her company, Brown Saddle Films. The documentary film is available online at Amazon Instant Video, Google Play, I Love Docs, Playstation, YouTube Movies, and VUDU. 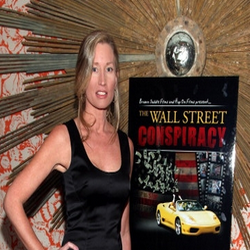 Every American should see this film

“Every American should see this film. Over the long course of making the film I actually saw the predictions of its subjects come true. My hope was that the film would come out before the financial meltdown of 2008. When the economy came crashing down, it was impossible for the media not to cover the story, and they finally did. Now, five years later, the media has moved on, and the American public believes the government has corrected the problem that caused the collapse of 2008, but in reality the problem still exists. My film explains the truth of our still broken financial system, and how our pensions and our savings are still very much at risk.” Kristina Leigh Copeland said.

The producer spent twelve years making “The Wall Street Conspiracy.” Anybody who spends 12 years making a film is clearly not in it for the money, glory, or fame. Kristina Leigh Copeland dedicated a huge portion of her life making the film because she believes the “conspiracy” presented there has affected and will continue to affect millions of Americans.

The main thrust of “The Wall Street Conspiracy,” is that opportunistic traders in large firms on Wall Street have for years engaged in the practice of “naked short selling.” Short selling has been an accepted practice in financial markets for centuries, but “naked short selling” is something that emerged since the advent of electronic trading on Wall Street. It is where traders sell shares of stock that don’t actually exist, profit from the sales, and in turn drive down the price of the stock. The film makers maintain that this practice also had much to do with the financial meltdown of 2008.

Copeland says, "This practice of naked short selling was often perpetrated on emerging publicly traded companies that had valuable goods and services to offer. Regardless of what real potential these companies had, rogue operators on Wall Street stripped them of all their value. Examples of companies that were affected by naked short selling include Eagletech Communications, Viragen, Overstock.com and it's CEO Patrck Byrne whom are featured in the film."

Copeland continues, "One of the people featured in the documentary is activist and writer, Mark Faulk, who literally waged a crusade for years trying to draw attention to this problem and was ignored by Wall Street regulators and Washington bureaucrats until after the crash of 2008." People are drawn to stories with easily identifiable bad guys like Mafioso, drug lords, and bank robbers, but “The Wall Street Conspiracy” presents bad guys that are far more treacherous because they loot the pension funds and life savings of hard working Americans every day with their unethical trading practices and stock manipulation. These are people who create nothing, contribute nothing, and continue to profit even as more and more Americans slip into poverty and as more small businesses go under. "

Copeland says, "The threat of another financial collapse is very real, and the next one will likely be much worse."

“The Wall Street Conspiracy,” deals with complex financial issues, in a very compelling, and comprehensive style that enlightens and educates the viewer. “Anybody who sees this film will most surely be outraged, and will hopefully be inspired to request physical copies of their stock certificates,” said Copeland.

"The Wall Street Conspiracy" can be rented or purchased here.