Critically acclaimed chefs and musicians from Philadelphia joined together for an epic evening to support veterans and their families. 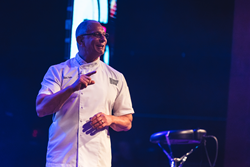 On Monday, May 13 at The Fillmore Philadelphia, celebrity chef Robert Irvine hosted the 3rd Annual Beats ‘n Eats Food + Music Event – an immersive, one-of-a-kind food and music experience designed to increase opportunities for veterans and members of the military – raising over $255,000 (up over 400% from last year) for the Robert Irvine Foundation.

“It’s an honor to watch Beats ‘n Eats grow year after year in support of the brave veterans and military who defend our freedom,’ said Chef Robert Irvine. “Thanks to all the chefs, entertainers and guests who attended to help us quadruple the funds raised for the Robert Irvine Foundation. I can guarantee that this will directly impact the lives of veterans and members of the military throughout the year. I can’t wait to see what next year brings!”

Beats ‘n Eats is returning to Philadelphia on May 18, 2020 and is expanding to Los Angeles in 2020. To stay informed, visit http://www.beatsneats.co.

LINK TO SELECT IMAGES: https://www.dropbox.com/sh/yz6iebsje3kgq3x/AABw9FlCvLDXYo9of7PNIpJba?dl=0
About Robert Irvine
With over 28 years of culinary experience around the world, award-winning Chef Robert Irvine is best known for hosting some of the Food Network’s highest rated shows including Restaurant: Impossible and Dinner: Impossible. Currently, Irvine is on tour with Robert Irvine: Live—an interactive culinary experience—hosts a video recipe series on BodyBuilding.com, and is a regular guest on national daytime shows. Irvine is the author of Impossible to Easy and Mission: Cook, gourmet cookbooks for home chefs, Fit Fuel, a healthy living guide and Family Table, a balance and nutritional guide for families. In 2013, Irvine launched FitCrunch protein bars, brownies and powders followed by Robert Irvine Foods, a line of nutritional food products, in 2015. A tireless supporter of the nation’s military, Irvine established The Robert Irvine Foundation in 2014 to support veterans and military causes. Irvine is the first celebrity chef to open a restaurant, Robert Irvine’s Fresh Kitchen, in the Pentagon in 2016. In 2017, Irvine opened a Gold's Gym franchise in Largo, Florida and Robert Irvine's Public House offering elevated pub fare at the Tropicana Las Vegas as well as teamed with Boardroom Spirits as co-owner to provide ‘better for you’ spirits. For more information on Chef Robert Irvine, visit ChefIrvine.com.