“Our Young People Speak: Racism - It’s Real” with author of The Hate You Give- Angie Thomas 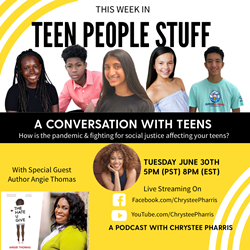 This Week In Teen People Stuff

This Week in Black People Sh*t, (BPS) hosted and created by actress Chrystee Pharris and Abdul Majid, and co-host Janora McDuffie will be holding a two-day virtual event.

On Tuesday, June 30, 5:00 PM (PST)/ 8:00 PM (EDT). Angie Thomas, author of the groundbreaking book, "The Hate You Give," will hold a conversation with teenagers. The teen guests will speak their minds and ask her questions.

The book, which 20th Century Fox turned into a feature film of the same name, starring Amandla Stenberg and Regina Hall, deals with the murder of a young black male teen by police officers. According to the Washington Post, over the past five years, 1,000 people have been shot and killed annually by the police.

In the past five months alone, the murders of Ahmaud Arbery, Breonna Taylor, Rashard Brooks, and George Floyd have reverberated throughout this nation and the world. The protests in the streets have created conversations from the boardrooms to the classrooms. This panel will finally offer young people, ages 12-16 an opportunity to have their voices heard and some of their questions answered.

On Wednesday July 1, 4:00 PM (PST)/ 7:00 PM (EST). Casting Director Jason Kennedy will discuss why he is now using his social media platforms to highlight and promote black actors. Known for his work on NCIS and NCIS Los Angeles, his act of solidarity is a sign that black actors matter with the goal of creating equal opportunities and exposure.

In the past week, several White voiceover actors have resigned their long standing roles of playing Black characters. However, one of the largest questions has been, why weren’t those jobs offered to Black actors in the first place? Chrystee Pharris will be joined by co-hosts Janora McDuffie and Abdul Majid for this lively and sure to be provocative discussion.

Chrystee currently stars on Craig Ross Jr.'s Monogamy and costars on season 3 of Goliath, both streaming on Amazon Prime. She is best known for NBC’s Passions & Scrubs and is a graduate of Emerson College. Janora McDuffie recurred on season 7 & 8 of Grey’s Anatomy. Abdul Majid is a film and television writer.

This Week In Black People Sh*tHollywood Shuffle- Is Hollywood reevaluating their hiring practices due to the current political climate?