Tom Ajamie has been selected by his peers to be included in the 27th edition of Best Lawyers in America® in the fields of Commercial Litigation, Corporate Law, Banking and Finance Litigation and Securities Litigation for the ninth year in a row. 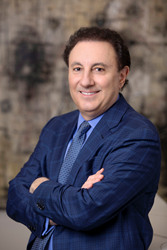 Mr. Ajamie is an internationally-recognized trial lawyer who has successfully represented clients in complex commercial litigation and arbitration. Among his successes, Mr. Ajamie won two of the largest awards ever handed down by an arbitration panel for investors, including a $429.5 million award. He also won a record civil RICO jury verdict — the largest in United States history, and recovered a record $79 million from Wells Fargo for financial advisors who had their compensation wrongfully withheld by the company.

The Hollywood Reporter named Mr. Ajamie a “Power Lawyer” for his role in uncovering and reporting on disgraced film producer Harvey Weinstein’s crimes, which contributed to Weinstein’s downfall as well as the rise of the #metoo social movement. The National Law Journal has named Mr. Ajamie in its “Trailblazers” rankings of the most elite trial lawyers in the United States, including its “Top Litigation Trailblazers” and “Top Plaintiffs’ Lawyers.” The authoritative Chambers and Partners has described Mr. Ajamie as “relentless, energetic and intelligent” and a “hard-working and successful trial lawyer who never quits.”

Mr. Ajamie is regularly invited to give legal analysis by news media outlets including ABC, CNN, CNBC, NPR and BBC, and his work has been featured in publications such as The Wall Street Journal, The New York Times and The American Lawyer. He is the co-author of the book Financial Serial Killers: Inside the World of Wall Street Money Hustlers, Swindlers, and Con Men.

Since it was first published in 1983, Best Lawyers® has become universally regarded as the definitive guide to legal excellence. Best Lawyers lists are compiled based on an exhaustive peer-review evaluation. Corporate Counsel magazine has called Best Lawyers “the most respected referral list of attorneys in practice.”

Ajamie LLP is a litigation law firm with a proven track record of large recoveries for victims of financial fraud at trials and arbitrations as well as a long history of defending corporations in complex commercial litigation. The firm is also widely recognized for providing cross-border representation in complex business litigation matters and has the skills and resources to represent clients worldwide. For more information about Ajamie LLP, visit the firm's website.