Recent release “East Coast Eventide” from Page Publishing author Thomas Koron is a suspenseful, action-packed story of two old rivals off the streets of New Jersey who are forced to team up when their territory and families come under threat. In a game where everyone is willing to bet but nobody wants to lose, the wagers are high, and the risk becomes perilous. 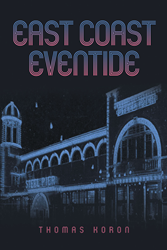 Thomas Koron, a first-time novelist, has completed his new book “East Coast Eventide”: a thrilling immersion into the underground world of illicit Atlantic City casinos in the 1960’s.

From the glamorous city streets and dark back alleyways of Atlantic City, to the luxurious mansions of New Jersey’s most powerful, a nonstop game of strategy has begun. Two long-time rivals are compelled to join forces in a battle toward ultimate dominance in New Jersey’s underground.

Published by Page Publishing, Thomas Koron’s suspenseful tale gives an up close and personal look into the nitty gritty of the city’s most notorious names in organized crime when a game that had long ago ended is uprooted once again.

Years after the battle for control of the city between Frank Moniarti and Nicholas Malone appears to have concluded, Moniarti’s son finds himself in the wrong place at the wrong time when his attempt at an engagement ring purchase ends in his witnessing a jewelry store robbery. With the arrival of New York crime boss Vincent Plemagoya, Moniarti and Malone team up to handle the newcomer in a tireless battle for revenge and redemption.

Readers who wish to experience this invigorating work can purchase “East Coast Eventide” at bookstores everywhere, or online at the Apple iTunes Store, Amazon, Google Play, or Barnes and Noble.