Recent release “The Saints of Maywood” from Page Publishing author Thomas O’Donnell is an evoking narrative about a priest convicted of unlawfulness whose character brings change to hardened criminals in prison. 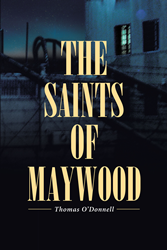 Thomas O’Donnell, a writer who teaches rhetoric, composition theory, philosophy, and writing at Loyola University, Elmhurst College, and Columbia College Chicago, has completed his new book “The Saints of Maywood”: a riveting account about an incarcerated priest who ushers in change and redemption to prison inmates.

Thomas writes, “Established in the high-crime years of the late 1980s, Maywood Correctional Facility was designed to house the region’s most violent and prolific felons. Inevitably, it suffered from the same problems endemic to similar institutions: extreme violence, drug abuse, gangs jockeying for power, high recidivism rates, high suicide rates, and a suffocating climate of futility and despair. Conditions go from bad to worse when the prison is privatized in the late 1990s. Under the supervision of Incarceration Alternatives—a ruthless, profit driven corporation—Maywood’s inmates are seen as mere customers. As a result, the few remaining educational and jobs programs are severely curtailed for the sake of increasing shareholder profits.

This dismal status quo is challenged upon the arrival of Father Dale Imbus—a worldly Jesuit priest—convicted of assaulting a police officer and providing unlawful assistance to Mexican and Latin American immigrants. The charismatic priest immediately begins to change the hearts and minds of Maywood’s population, compelling the inmates to question the meaning of their suffering, the possibility of forgiveness, the purpose of their lives, and their prospects upon release. As rumors of the priest’s ability to heal bodies and souls spread beyond the confines of Maywood, a group of wealthy, sympathetic citizens commence plotting a takeover of Incarceration Alternatives. The stage is set for two interrelated conflicts: one between the citizen supporters of Maywood’s inmates and the shareholders who determine its purpose and priorities; the other between the priest’s growing band of loyal disciples and the members of an ultraviolent Aryan gang, committed to reclaiming their diminishing power by any means necessary.”

Published by Page Publishing, Thomas O’Donnell’s evoking opus shows how salvation reaches out to the sinful and lost in the most unexpected of ways amid opposition and violence.

Readers who wish to experience this reverent and thought-provoking work can purchase “The Saints of Maywood” at bookstores everywhere, or online at the Apple iTunes Store, Amazon, Google Play, or Barnes and Noble.