The NY Chinese Democracy Force held a rally to Terminate the Chinese Communist Party and elect the Republicans around the county. A guest speaker was Congressional Candidate Thomas Zmich (NY 6TH CD). 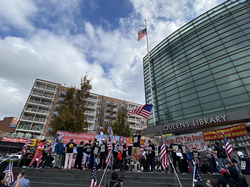 "The race is too close to call and could flip control over to the Republican Party," said Thomas Zmich.

Thomas Zmich is the Republican and Conservative, Libertarian candidate running against Grace Meng, the Democratic incumbent in the NY 6th congressional district. Elisa Nahoum is running against Democrat John Liu.

Over 200 people participated in the rally and marched in the parade.

According to the Christians from Church of the Rock, NY, Global Alliance for Hong Kong NY Branch, and NY Chinese Democracy Force, the China Communist Party is the largest terrorist group in the world. Its regime is illegal, not selected by the Chinese people. It has caused the death of about 80 million innocent Chinese during its 70 years of ruling through class struggle and man-made famine. It is alleged that they spread the Coronavirus to the world causing incalculable damage to most of the countries. On the heels of the arrest of the Hong Kong CCP spy, Officer Baimadajie Angwang, 33, a community affairs cop with the 111th Precinct in Queens, NY, and the closure of the Chinese Consulate in Houston, the Chinese with conscience in the US strongly request to eliminate all the CCP spies and their harbors.

The Association wants America to return to God.

Thomas Zmich is running on a budget and is gathering the support of diverse voters in the district.

ABOUT THOMAS ZMICH
Thomas is a proud American who served in the U.S. Army Reserve and wants to continue his service in Washington and will unite our diverse neighborhoods in Queens.