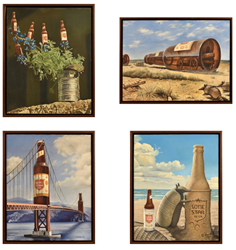 “One of the original posters from the campaign recently sold for over $5,000 at auction, and these are the original paintings, not posters,” said Burley.

Threadgill’s Last Call Auction, which followed a month-long music series of the same name, will take place this weekend November 7 and 8 at the Threadgill’s Old No. 1 restaurant, 6416 North Lamar in Austin.

Austin’s historic Threadgill’s closed for good in March 2020, another victim of the pandemic and property taxes. Rather than let the iconic landmark fade away quietly, Robb Burley of Burleydillo productions teamed up with Eddie and Sandra Wilson to give the place the musical sendoff it deserves, which fittingly concluded on November 1 with a final “Day of the Dead” show. Burley of Burley’s Auction House will also be the auctioneer this weekend (15%BP TX#15184.). Those unable to attend can utilize live internet bidding available through http://www.icollector.com, or through phone and absentee bidding. Details can be found at http://www.burleyauction.com.

One of the items from Eddie Wilson’s collection is the door knocker that was on the front bar of the Armadillo World Headquarters used to warn patrons of an impending TABC or police raid.

“They would rap that thing once or twice and you could hear it clear through the building if they ever raided the place,” said Burley.

Among the Jim Franklin inventory to be auctioned are original paintings from the “Long live longnecks” ad campaign, which single-handedly saved the longneck bottle from being phased out – a memory fondly retold during the final musical show.

“One of the original posters from the campaign recently sold for over $5,000 at auction, and these are the original paintings, not posters,” said Burley.

The late Willy Rader’s Armadillo World Headquarters poster and memorabilia collection will round out the auction with rare posters from the collection of the man responsible for hanging posters for the venue, complete with a check for “0 dollars & 0 cents” made out to him on the last day the “Dillo” was open, as he was paid solely in posters. The Sunday, November 8 auction session will be for the vast amounts of restaurant equipment.

Those interested in attending the auction can find complete details at http://www.burleyauction.com or by calling 830-629-9280.