Valentines week is always a busy week at Three Brothers Bakery as they recognize both those celebrating not only Valentines Day, but also Anti-Valentines Day on February 14th and then two days later celebrate the 7th anniversary of their Memorial City location. 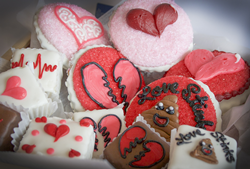 You shouldn’t have to send yourself flowers anonymously on Valentines Day. Just drown your sorrows with a sweet treat that expresses how you really feel from our Anti-Valentines Day line of baked goods,” said 5th generation bakery, Bobby Jucker.

Love is in the air, but not for everyone on Valentines Day. Since 2013 the bakers at Three Brothers Bakery have wanted to make the air a little sweeter, even for those who celebrate Anti-Valentines Day. Now the holiday seems to have an official moniker – S.A.D. – Singles Awareness Day. Janice Jucker said, “before Bobby was my lifelong Valentine, I once sent myself flowers to work from a secret admirer, so I wouldn’t feel left out.”

This statement got 5th generation baker, Bobby Jucker, thinking about how everyone could be included on Valentines Day. “You shouldn’t have to send yourself flowers anonymously on Valentines Day. Just drown your sorrows with a sweet treat that expresses how you really feel,” said Jucker. And that was the start of an annual tradition to be more inclusive with the creation of Three Brothers Bakery’s Anti-Valentines Day line of sumptuous goodies with cookies and petit fours saying “love stinks” and a poopie emoji to something as simple as saying “I hate you,” for those in the Broken Hearts Club. Of course, they still offer the traditional “be mine,” “I love you,” and even “Marry Me?” messages. There is something for everyone – even heart shaped King Cakes for those Mardi Gras loving lovebirds. Loving and non-loving baked goods can be purchased online or at one of their three Houston area stores.

Two days after Valentines Day the bakery is celebrating another milestone – the 7th anniversary of their Memorial location. It is always a special anniversary for the owners of Three Brothers Bakery, Bobby and Janice Jucker, as its opening signaled they had turned a corner and was growing again after Hurricane Ike in 2008. This Saturday, February 16, 2019, Three Brothers Bakery will celebrate the milestone and invite their loyal customers to join them at their Memorial City location for a cake cutting at 12 noon. The Memorial City bakery is located at 12393 Kingsride Lane, Houston, TX 77024 in the Memorial City Shopping District.

About Three Brothers Bakery
The traditions of Three Brothers Bakery began in Chrzanow, Poland circa 1825, and were preserved despite the family’s concentration camp imprisonment during the Holocaust. Their miraculous liberation, and subsequent move to Houston, brought Eastern European scratch baking traditions to 4036 S. Braeswood Blvd, 12393 Kingsride Lane, and 4606 Washington Ave where the owners are now proud to call themselves “memory makers who just happen to be bakers®.” Perfecting the process for almost 200 years, each day the fifth generation bakers produce mostly dairy-free breads and pastries, cookies, a full line of specialty dessert cakes and pies, as well as custom birthday, special occasion, wedding and groom’s cakes using only the highest quality ingredients.

The Three Brothers Bakery pecan pie was named “the best mail order pecan pie America has to offer” by Country Living magazine most recently in 2016, bakery owner, Bobby Jucker competed in the popular ‘Food Network Challenge’ and has been seen on Food Network’s Outrageous Food. Three Brothers won “Best Mail-Order Pies 2012” from Bon Appetit, as well as Modern Baking’s “2013 Retail Bakery of the Year” and was part of The Knot’s “2010-2013 Best of Weddings” and “Hall of Fame” picks. In 2013, the bakery won the Jeffrey Butland Family-Owned Business of the Year by the Houston division of the U.S. Small Business Administration. Most recently, Three Brothers Bakery was named one of “America’s 20 Best Bakeries” by The Daily Meal in 2016 and in 2017 blue ribbon champion at the American Pie Council’s National Pie Championship for their key lime pie in that category, and in 2018, the bakery’s Pumpecapple Pie Cake was featured on BuzzFeed’s ‘Worth It’ web series.