Two days before the Jewish holiday of Rosh Hashanah, Three Brothers Bakery, sweetens their holiday offerings with a 70 cent cookie promotion, once again, in honor of the second National Bakery Day and the bakery’s 70th year in business in Houston, Texas. 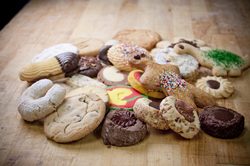 "This year National Bakery Day is just two days before the Jewish holiday of Rosh Hashanah so 70 cent cookies will be quite a bonus for those wanting to add to their traditional holiday fare of round challahs, honey cakes, other holiday favorites with a few extra cookies," added Jucker.

In a throwback to the past and to honor National Bakery Day on September 27, 2019, Three Brothers Bakery will offer all regular cookies for 70 cents each while supplies last. To take advantage of this “sweet” offer patrons just need to stop by one of the bakery’s three stores:

“70 cent cookies was so well received on our 70th anniversary, last May, that we thought it would be a perfect way to thank our customers for helping us get to this day,” said fifth generation baker and co-owner, Bobby Jucker.

“This year National Bakery Day is just two days before the Jewish holiday of Rosh Hashanah so 70 cent cookies will be quite a bonus for those wanting to add to their traditional holiday fare of round challahs, honey cakes, other holiday favorites with a few extra cookies,” added Jucker

The 70 cent cookie promotion is in-store only on Friday, September 27th, 2019, and it does not include dip decs, regular size gingerbread men, hamentaschen or lady fingers. All regular cookies that end in the word “cookie” are included.