Three People Decide to End Abortion, and the Results Are Nothing Like What They Expected

Xulon Press presents a novel about waiting for God’s timing. 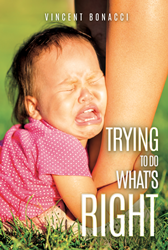 I wanted to put a face on all of the people in the abortion issue and not speak in broad, general terms

Do you ever feel that God must have gotten stuck in traffic? Bonacci has written a story about three people who seem to think that God needs their help getting the abortion debate under control. Attempting to “work out their salvation with fear and trembling,” they take on a fight for which they are not entirely prepared! The story centers around abortion, but the larger issue is whether or not forcing our beliefs on others was what God truly had in mind.

“I wanted to put a face on all of the people in the abortion issue and not speak in broad, general terms,” said Bonacci.

Vincent Bonacci was born and raised in Rochester, New York. He was the oldest of three boys. He attended college for two years, but realized that he didn't want to be an accountant. At nineteen, he became a born-again Christian, and moved out to California. He and his wife, Joanne, share three sons, two step-sons and three beautiful grand-daughters.

Xulon Press, a division of Salem Media Group, is the world’s largest Christian self-publisher, with more than 15,000 titles published to date. Trying To Do What’s Right is available online through xulonpress.com/bookstore, amazon.com, and barnesandnoble.com.