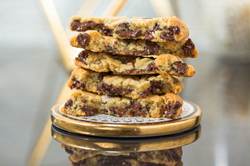 "This will be the first of many territory partnerships we plan to sign that will allow us to partner with accomplished, influential, community-based investors to further accelerate our growth across the nation,” said Leon Chen, co-founder and CEO of Tiff’s Treats.

Tiff’s Treats, the iconic brand that pioneered the warm cookie delivery concept, today announced a new Territory Partnership Agreement led by Pixiu Investments, the investment firm of Eduardo Margain and Chris Loughlin. The new financing commits $10 million to a territory partnership to support Tiff’s Treats’ expansion to three new markets outside of Texas, to be announced over the next year.

“We’re excited to continue our expansion and deliver warm cookie moments to more cities across the country. This will be the first of many territory partnerships we plan to sign that will allow us to partner with accomplished, influential, community-based investors to further accelerate our growth across the nation,” said Leon Chen, co-founder and CEO of Tiff’s Treats.

The latest funding follows $65 million raised in the last 5 years led by firms such as Morgan Stanley Expansion Capital, CIC Partners and Capstar Partners. In addition, the company has received recent investment from basketball legend Dirk Nowitzki and fashion designer Kendra Scott, as well as tennis star Andy Roddick and his wife, actress Brooklyn Decker, long-time Tiff’s Treats fans who came on board as brand ambassadors in 2018.

About Tiff’s Treats
In 1999, Tiffany Taylor accidentally stood up Leon Chen for a date. As an apology, she baked and delivered a batch of warm cookies, and the concept of warm cookie delivery was born. Tiff and Leon, just 19-year-old sophomores at The University of Texas at Austin at the time, opened Tiff’s Treats with $20, a cell phone and a dream. Since then, the business has grown to 63 stores in Texas, Georgia, Tennessee and North Carolina, with more than 1,500 employees, baking hundreds of millions of cookies since the company started. The founders are now married and the business continues to grow, but Tiff’s Treats has the same core mission: creating memorable moments through classic, baked-to-order cookies and specialty desserts from high-quality ingredients, and delivering them straight from the oven to the home or office, warm, in about an hour. Customers can order online, with the Tiff’s Treats app or by phone, all supported by industry-leading technology and top-notch customer service. The charitably-minded company continually gives back with hundreds of thousands of cookies per year donated to nonprofit organizations and most store opening celebrations benefiting a local charity. To date, Tiff’s Treats has donated well over $1 million in products and funds to charitable organizations. To learn more, please visit https://www.cookiedelivery.com.