“Christmas Under the Fiery Star” from Christian Faith Publishing author Tim Greathouse is a well-conceived account of a shepherd boy’s very first Christmas experience after witnessing the arrival of the Messiah. 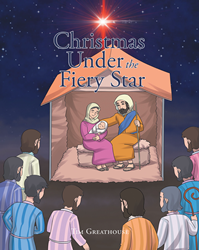 Greathouse shares, “Fulfilling prophecy, God uses the tiny and often obscure village of Bethlehem to announce the arrival of the long awaited Messiah. However, no one expected that the arrival of the Christ child would also include such a display of the celestial and heavenly bodies. Especially the fiery star that appeared earlier in the day and settled directly above the birthplace of baby Jesus.

Natanel, a local shepherd boy, witnesses the events, but his young mind struggles to understand what it all means.

His father Hillalel, although also being struck by such an event, remains surprisingly calm as he recognizes God’s handiwork and uses this knowledge to calm the fears of his young son.”

Published by Christian Faith Publishing, Tim Greathouse’s new book is truly an inspiring narrative that teaches the youth with lessons on faith and spirituality by way of appreciating the beauty of the universe.

View a synopsis of “Christmas Under the Fiery Star” on YouTube.

Consumers can purchase “Christmas Under the Fiery Star” at traditional brick & mortar bookstores, or online at Amazon.com, Apple iTunes store, or Barnes and Noble.

For additional information or inquiries about “Christmas Under the Fiery Star”, contact the Christian Faith Publishing media department at 866-554-0919.