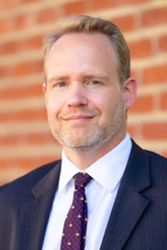 “My interest in the OLTA stems from the work it does fighting for the little guy in Oregon. It doesn’t cave to corporate interests and strives to uphold peoples’ Constitutional rights to a fair jury trial, access to the justice system, as well as promoting juries and jury service,” Williams explaine

An Oregon attorney for nearly 20 years, Williams has been a member of the OTLA since he was a law school student, serving as the OTLA’s first ever Law School Liaison. In 2005, Williams was elected to the OTLA’s Board of Governors and has remained in that role ever since. He has also served on the OTLA’s Executive Committee and for the past seven years, and in addition, has served as OTLA’s representative on the American Association for Justice Board of Governors, as well as on AAJ’s Executive Committee.

“My interest in the OLTA stems from the work it does fighting for the little guy in Oregon. It doesn’t cave to corporate interests and strives to uphold peoples’ Constitutional rights to a fair jury trial, access to the justice system, as well as promoting juries and jury service,” Williams explained.

In addition, Williams’ firm has a history with serving the OLTA. His law partner and firm founder, Roy Dwyer, served as president of the OTLA from 1976 to1978. “It’s a real joy to have my long-time law partner and son in law assume the presidency of OTLA this year and carry on the tradition,” Dwyer said. “I know he will serve with distinction.”

Williams continued, “My desire to serve as OTLA’s president is also in part a family legacy to honor Roy’s prior commitment, as well as our firm’s commitment to OTLA as a whole. If it weren’t for OTLA, victims’ rights to fair and just compensation would have been capped and gutted decades ago!”

Williams’ appointment also has the support of the legal community in which he serves, including a distinguished group of Oregon attorneys that have served as past presidents of the OTLA:

“I can attest to Tim’s skills as a trial lawyer who represents people, not insurance companies or corporations. I can also attest to his work ethic and leadership skills. The OTLA will be well served by his leadership.” — Neil Jackson, Esq., Portland

“Tim always listens carefully and sees clearly, and he brings energy, spirit and a strong sense of community to his role as leader. I’m very pleased and grateful that he’s our president in these difficult times.” — Kathryn H. Clark, Esq., Portland

“Tim exemplifies outstanding devotion to the pursuit of justice for injured people and to holding those who cause harm accountable. I observed first hand Tim’s commitment to improving the justice system through legislative efforts to protect access to justice for Oregonians and through his education programs to advance the trial advocacy skills of younger lawyers throughout Oregon. Tim is also committed to helping under-served communities and people of color. One example of his efforts is his generous donation of time and money to OTLA’s Bike Helmet Safety Program which provides bike helmets for kids in under-served communities.” — Hala J. Gores, Esq., Portland

“Tim has given selflessly of his time to OTLA and, before that, to the Oregon State Bar. He is both a mentor and an inspiration to younger lawyers. After I was elected to become OTLA President in 2017, I encouraged Tim to run for the executive committee because I saw firsthand his legal skills, his willingness to give back to the profession, and his commitment to the legal profession.” — Gregory K. Zeuthen, Esq., Portland

Williams has received many accolades for his trial work in personal injury law and is active in legal and community organizations throughout Oregon. He is a longstanding member of the Bend Rotary Club, served on the Ronald McDonald House Charities of Central Oregon’s Board of Directors for many years, is a past vice president of the Oregon State Bar and, in his off time, is considered by many as one of the state’s top youth basketball coaches.

We are a personal injury law firm that has arbitrated, mediated, settled, and tried more than 650 personal injury cases in the past three years alone, recovering more than $30 million for our injured clients during that time.

For more than 55 years, our award-winning team of lawyers has built a reputation of competence and compassion in handling complex personal injury matters, and have gone up against some of the country’s biggest insurance and transportation companies. With a 98 percent success rate, we negotiate settlements and litigate when necessary to reach the maximum outcomes for our clients. We recognize our clients’ challenges extend beyond legal issues, and throughout the process our attorneys guide our clients as they confront physical, emotional, and financial hardships associated with traumatic events.

With six offices throughout Oregon, we have established deep roots within our communities. Our nationally recognized attorneys are active leaders and members of trial, legal and civic associations. Looking to become a certified B Corp, Dwyer Williams Cherkoss is part of a community of leaders driving a global movement of using business as a force for good. We are committed to considering the impact of our decisions on employees, clients, other businesses, community, and the environment.