Tinker to Evers to Chance: SGC to Unveil Jerseys of the Legendary Chicago Cubs Trio at National Sports Collectors Convention in Chicago

SGC, a top sports memorabilia authentication service, today announced its annual return to the 40th National Sports Collectors Convention in Chicago, IL on July 31 through Aug. 4, 2019. As part of its Museum Display, SGC will unveil a one-of-a-kind “Tinker to Evers to Chance” exhibit featuring game-worn jerseys from the legendary Chicago Cubs trio. 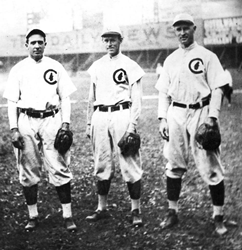 “We are very excited to bring the game-worn jerseys of Joe Tinker, Johnny Evers, and Frank Chance to the hometown of their beloved Chicago Cubs.” - SGC CEO Dave Forman.

In addition, SGC’s one-of-a-kind collection of iconic sports memorabilia, will feature a game-worn Ernie Banks jersey, several highly prized baseball cards, including a 1952 Mickey Mantle rookie, and an ultra-rare collection of Babe Ruth postcards among other items. The company will also offer on-site card grading, giveaways, and much more!

“We are very excited to bring the game-worn jerseys of Joe Tinker, Johnny Evers, and Frank Chance to the hometown of their beloved Chicago Cubs,” said SGC CEO Dave Forman. "This Baseball Hall of Fame trio left an indelible mark on this team, this city, and the game itself, and we are honored to bring a part of this history to the National Sports Collectors Convention this year.”

SGC uniform expert Dave Grob added: "If I had previously not had the honor and pleasure of examining these jerseys, I would be making a special trip just to see them and bask in their history and significance."

Members of the press interested in speaking with the SGC team to learn more about its Museum Exhibit should contact Vlad Drazdovich at (954) 696-5965 or vlad@redbanyan.com.

About SGC
Established in 1998, SGC is one of the most trusted card grading and game-worn uniform authentication companies for collectors worldwide. Comprised of experienced and respected graders and authenticators, SGC sets the industry standard with the consistency, integrity, and quality of its services. With a host of tech updates in progress, SGC customers will enjoy an array of unique collector support and security features, including an interactive submission platform with order tracking, grader notes, a rich database of all items ever graded by the company, high-quality card and uniform images, and much more. To learn more about SGC and its grading and authentication services visit http://www.gosgc.com, like the SGC Facebook page, and follow the company Instagram account @sgcgrading.