Video content will take participants on a journey through the mountains of Dongting during harvest season for Biluochun, one of China’s most prized teas 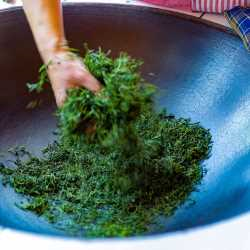 Biluochun, one of China's most prized teas, is harvested in Suzhou in March and April each year.

Biluochun, which translates directly to “green snail spring” and dates back to the Qing Dynasty, is grown only in Suzhou and renowned for its five outstanding characteristics: a unique coiled shape, fruity fragrance, floral aroma, white feathery appearance and early harvest.

The ancient city of Suzhou will be celebrating its rich tea culture this month by inviting its social media followers on a journey through the sprawling tea fields that produce Biluochun, one of China’s most prized teas. The art of producing Biluochun has been recognized as an Intangible Cultural Heritage on a national level, and on Wednesday, April 21, social media users are invited to tune in to @VisitSuzhou on Instagram, Facebook, and Twitter for an insider’s look at the Suzhou Dongshan Wunong Biluochun Tea Cooperative where more than 250 farmers oversee the tea’s production. A local English-speaking guide will escort viewers through the cooperative, guided by renowned tea expert and educator Ms. Junjun Chen. A corresponding sweepstakes available online will give participants the chance to enter to win a sample of Biluochun tea and a $500 American Express gift card that can be used toward a future trip to Suzhou.

Biluochun is grown only in the mountains of Dongting on the shores of Lake Tai, where cool, misty conditions provide the ideal conditions for growing this high-quality tea. Biluochun, which translates directly to “green snail spring” and dates back to the Qing Dynasty, is renowned for its five outstanding characteristics: a unique coiled shape, fruity fragrance, floral aroma, white feathery appearance and early harvest. The floral aroma is produced in part by the apricot, plum, and peach trees that are planted in between tea bushes. Its short, early harvest season takes place from mid-March through April. Biluochun is hand-harvested, and only the highest quality leaves are selected, which accounts for its exclusivity.

These online activities are part of “Suzhou, The City of Culture & Arts,” an integrated marketing campaign designed to bring the destination’s fascinating cultural heritage to life for English-speaking travelers in North America and Europe. Exclusive campaign content exploring some of the most fascinating aspects of Suzhou can be accessed using the hashtag #SecretsOfSuzhou, and travelers who have visited the destination are encouraged to share their Suzhou travel tips using the same hashtag for the chance to be featured.