Tired wanderer embarks on a journey that unexpectedly retraces his younger years, then stumbles upon a place that will answer his longing

R.J. Stachofsky’s debuts into the publishing scene with ‘The Watchman’s Son’ 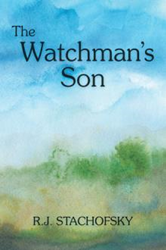 Set in the late 1800s, the life of a 30-something tired wanderer who longs to settle down and the story of how he lives with a simple family is told in R.J. Stachofsky’s new book, “The Watchman’s Son” (published by Trafford Publishing).

Stachofsky cumulated the pieces of his first fiction from his own life experiences and struggles. “I wrote from my heart, mind and soul. It is based on my life's truths, scars and joys,” he says.

“The Watchman’s Son” tells the soulful journey of Jacob Sparks, a kind-hearted survivor who has life’s wisdom. As he wanders the West to ease his longing, he goes on a series of adventures, meets interesting characters and learns a lot about life. Along the way, he learns the skills of a carpenter and is later befriended by Native Americans where he is taught life skills that will support his nomadic life.

Jacob’s journey takes an unexpected turn that sees him retrace the steps of his younger years. He shares his story while explaining his regrets, downfalls and life lessons to Nate Harris, who, as the book title says, is the watchman's son.

Stachofsky’s inspiration to the book title is the lyric from a song by Mumford and Sons, which reads "I’ll explain it all to the watchman's son." “I thought that would make a great title to a book about a man that had life stories to share with a younger person,” he explains.

Through his book, Stachofsky hopes to relay that true freedom can be achieved through asking forgiveness from those we transgress against. For more information on the book, please visit https://www.barnesandnoble.com/w/the-watchmans-son-mr-richard-j-stachofsky/1126611155?ean=9781490798615.

About the Author
R.J. Stachofsky was born and raised in Spokane, Washington. He grew up spending many hours exploring the banks of the Spokane River. He made a living as a carpenter. Started out with framing houses, he later became superintendent and an owner’s representative for a major department store. Stachofsky has worked in 22 states, including Hawaii, Alaska, Mexico City, United Arab Emirates, Kuwait and Saudi Arabia. He currently resides in Phoenix, Arizona with his wife of 37 years.