To Canada and Beyond: Native Grape Odyssey Unveils Its Forthcoming Educational Program for September 2019

Native Grape Odyssey (NGO) unveiled its educational program for the Fall 2019 in Toronto, Canada. Following the press conference held yesterday (Wednesday July 10th, 2019) at the Grand Cru Deli in Toronto, NGO General Coordinator Stevie Kim presented the NGO Maestro program which will run in Toronto from September 15th to 19th. Press event attendees also joined in for a tasting on Italian wines from the north-west led by Master Sommelier Bruce Wallner (also founder and director of the The Sommelier Factory wine school annexed to the event venue). 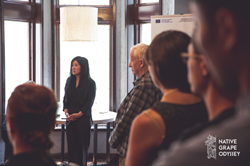 During the press conference held yesterday, July 10th, at Grand Cru Deli in Toronto, NGO General Coordinator Stevie Kim illustrated the details of the NGO Maestro program, consisting of the NGO Maestro course on European wines and a Walk around tasting [...].

After the official project launch during Vinitaly 2019, Native Grape Odyssey is now ready to announce the local projects for its partner countries, Canada, Russia, and Japan. During the press conference held yesterday, July 10th, at Grand Cru Deli in Toronto, NGO General Coordinator Stevie Kim illustrated the details of the NGO Maestro program, consisting of the NGO Maestro course on European wines and a Walk around tasting scheduled to take place in Toronto from September 15th to 19th, 2019. After the presentation of the NGO Maestro Program, Kim also offered a preview of forthcoming NGO publications, namely, a series of six volumes on European wines. Subsequently, Master Sommelier Bruce Wallner took center-stage to lead a tasting of six wines made from native grape varieties from the north-west of Italy.

The focus of the forthcoming NGO Maestro course will be European native grapes and the wines produced from them. By combining theory lectures and guided tasting, the course will also feature a daily Tasting Lab, a more informal group tasting where students will be able to taste a wider array of wines. These sessions will also be a great opportunity for students to build a community of dedicated wine professionals passionate about promoting European wine in their respective countries.

At the end of the press conference, Kim illustrated the long-term editorial program for NGO, from 2019 to 2021. In this program, leading experts and researchers in the field of oenology will contribute to a series of six volumes on Italian native grapes and wine areas. Since wines cannot be studied without a deep understanding of the territories in which they are produced together with their distinctive environmental, climatic, and cultural characteristics, the NGO educational material—as well as the course—will follow a regional approach, highlighting similarities and differences between wines produced in the same territory.

The Toronto press conference was followed by a tasting led by Master Sommelier Bruce Wallner, also the Founder and Director of the Sommelier Factory wine school annexed to the event venue. For the tasting, Bruce Wallner MS selected six wines from north-western regions of Italy such as Liguria, Piemonte, and Lombardia:

To highlight the fact that territories are a major feature of wine production, Wallner chose three wines made with the same grape variety, yet belonging to three different denominations. This distinctiveness is made possible thanks to key elements in each respective territory which affect the growth of the vine and its grapes, thus affecting vinification and the characteristics of the resulting wines. As such, Barbaresco DOCG, Barolo Riserva DOCG, and Valtellina Superiore DOCG are three wines obtained from the Nebbiolo grape variety. However, the difference in the terroir where these grapes are cultivated makes them three distinctive and unique wines. Bruce Wallner MS started from the analysis of the wine in the glass and progressed backwardly, discussing production phases, grape harvest, and vine tending. In a nutshell, the tasting showcased the teaching approach which will be implemented for the NGO Maestro course.

Applications for the NGO Canada program are currently being received and will be open until August 23rd, 2019. Prospective candidates can apply for the course in Toronto by filling in the application form available at the following link: canada.nativegrapeodyssey.com/apply-canada/ . Following the evaluation of the applicants’ CVs, the selected candidates will be notified by email.

About: Native Grape Odyssey is a project financed by the European Union and managed by Unione Italiana Vini and Zante Agricultural Cooperatives Union for the promotion of PDO and PGI European wines abroad, in particular in three countries: Japan, Canada and Russia. In order to achieve this, the Native Grape Odyssey educational program will organize wine seminars, workshops and b2b meetings both in these countries and in Verona, Italy, inviting wine experts and influencers from these countries. These events, realized in the span of three years (2019-21) aim at creating awareness about European native wines abroad, in particular Italian and Greek wines, which share a long tradition and a high standard of quality.

Native Grape Odyssey Press Release: "To Canada and beyond"