“Duty Honor Freedom” from Christian Faith Publishing author Toby Elkins is a brilliant narrative that follows John Wheeler, an Army Ranger, who finds himself in the middle of a rift with the state police after land developers barged in to take their land. 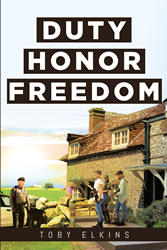 “Duty Honor Freedom”: a gripping tale about a man who weighs between his duty to his family and nation and his own beliefs and principles. “Duty Honor Freedom” is the creation of published author Toby Elkins, a husband and father of two boys and a girl. After serving in the Army for three years, he has worked as a carpenter, truck driver, and, for the last twenty years, a butcher.

Elkins shares, “John Wheeler had done more than his fair share time fighting Muslim extremist and terrorist as a member of the Army Rangers. He had not been there when his parents and grandfather died. It had nearly cost him the love of his life, his loving wife. All he wants now is to live a quiet life as a farmer on land that his family has owned since 1800. Fate had other ideas as a land developer sees his land as the best place to build a gated community with a private golf course and lake.

“Now, John finds himself in an armed standoff with state police who are using eminent domain to give his family land to the developers. He also finds himself trying to come to grips with a country that seems to be changing faster than he can understand and a conscience that can't live with another good man's death on his soul. The balance—between the duty he feels to his family’s history and country—pulls on his soul and feelings of standing up for what he knows and believes. He is starting to accept the changes that the future will always bring.”

Published by Christian Faith Publishing, Toby Elkins’s new book is a fascinating account of one man’s journey throughout the years where he found himself in different situations and different encounters in a complicated world.

View a synopsis of “Duty Honor Freedom” on YouTube.