November 20 marks the opening day of gun hunting deer season in the Tennessee River Valley. The long held tradition of a Thanksgiving hunt continues today because of past conservation efforts of sportsmen. 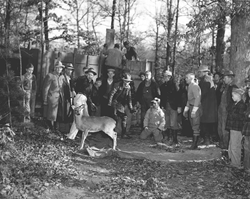 Owing to habitat conservation restoration efforts and wildlife population rehabilitation programs, the range of white-tailed deer in Tennessee has expanded from a few counties in east Tennessee in the 1940s to all 95 counties

When European settlers moved into the Tennessee Valley, they found plentiful wild game animals, and pristine rivers teeming with fish.

People became alarmed about these declines as early as 1870, when the Tennessee legislature adopted laws to protect rivers from overfishing. In 1887, the legislature prohibited the exportation of wild game, and in 1889 outlawed market hunting of bobwhite quail. In 1903, the General Assembly established the Game, Fish, and Forestry Department, which made all game and fish property of the state, and required hunting licenses for the first time in 1907.

In 1925, land developers and fishermen at Reelfoot Lake clashed over access to that fishery, leading to the establishment of the lake as a state game and fish preserve, the first step toward the creation of state parks in Tennessee. In 1936 the 625,350-acre Cherokee National Forest was established, and in 1926, President Calvin Coolidge signed legislation to create the Great Smoky Mountains National Park (GSMNP).

By 1937, Franklin D. Roosevelt signed the Federal Aid in Wildlife Restoration Act -- the brainchild of the country’s hunters and anglers -- into law, establishing a manufacturers' excise tax on sporting arms and ammunition to generate revenue for wildlife conservation. Since its inception, more than $14 billion has gone to buying wildlife habitat and reintroducing imperiled species.

The organization’s efforts to take the politics out of wildlife management culminated in the legislature’s creation in 1949 of the Tennessee Fish & Wildlife Commission, which receives no funding from the General Fund, and operates entirely on license fees, fines, permits, leases or federal allocations. The League’s efforts were watershed events that led the state into modern scientific wildlife management.

All of the above-mentioned efforts have had a tremendous impact on wildlife conservation in the Tennessee River Valley. Today there are almost 5,000 bears distributed across east and middle Tennessee, and deer hunters harvested 159,935 deer during the 2021-22 hunting season (deer populations now number in the millions). Tennessee hunters harvested 40,105 wild turkeys during the spring season alone in 2021. Unfortunately, grouse and quail are still declining, despite conservationists’ efforts to restore these populations, due in part to loss of habitat from human development.

The TRV Stewardship Council is a nonprofit comprised of destinations committed to environmental stewardship, social responsibility, and economic prosperity within the Tennessee River Valley. The mapguide is supported by the generosity of the Tennessee Valley Authority (TVA), volunteer members consisting of Chambers of Commerce, Convention & Visitors Bureaus, businesses, and individuals. Learn more by visiting the web site at http://www.ExploreTRV.com.