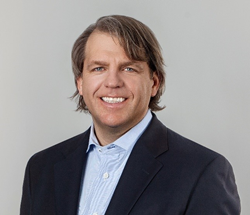 “Finding homes for the rising number of children awaiting adoption from foster care is an imperative, and makes the Dave Thomas Foundation for Adoption’s work critically important,” said Boehly. “I’m honored to support the Foundation’s mission in this new role.”

The Dave Thomas Foundation for Adoption, a national non-profit public charity, today welcomed Todd L. Boehly as a member of its board of trustees, serving a three-year term. Boehly is the chairman and CEO of Eldridge Industries, a private investment firm, that employs more than 2,500 people in businesses across asset management and leasing, insurance, real estate, food and consumer experiences, sports and media. He also sits on the board of NPC International, which owns nearly 400 Wendy’s® restaurants in seven states and Washington, D.C.

“Finding homes for the rising number of children awaiting adoption from foster care is an imperative, and makes the Dave Thomas Foundation for Adoption’s work critically important,” said Boehly. “I’m honored to support the Foundation’s mission in this new role.”

Boehly also serves as chairman of Valence Media, which owns MRC, dick clark productions, Billboard, The Hollywood Reporter, and minority positions in A24 and Fulwell 73. Additionally, Boehly is an owner of the Los Angeles Dodgers, the Los Angeles Sparks, and Cloud9.

“Todd’s visionary leadership, diverse business experience and passion for the cause of foster care adoption will be tremendous assets to the Foundation,” said Mary Schell, chief public affairs officer for The Wendy’s® Company and chair of the Dave Thomas Foundation for Adoption’s board of trustees.

Through its signature program, Wendy’s Wonderful Kids, the Dave Thomas Foundation for Adoption provides funding to adoption agencies to hire recruiters who implement an evidence-based, child-focused recruitment model. A rigorous, five-year evaluation revealed that the model is up to three times more effective at serving children who have been in foster care the longest, including teenagers, children with special needs and siblings.

To date, more than 430 Wendy’s Wonderful Kids recruiters have found adoptive homes for more than 8,500 children in foster care across North America.

“Todd’s leadership, business acumen and experience will be incredibly valuable as the Foundation continues expanding Wendy’s Wonderful Kids across the United States to serve the growing number of children waiting to be adopted from foster care,” said Rita Soronen, president & CEO of the Dave Thomas Foundation for Adoption. “I’m grateful for his service and look forward to working with him to grow the Foundation’s impact in the years ahead.”

Boehly received his Bachelor of Business Administration from the College of William & Mary, where he later founded the Boehly Center for Excellence in Finance, and studied at the London School of Economics.