Recent release “A Heart Needs a Second Chance” from Page Publishing author Tom Adornetto details a man’s heavy heart over the loss of his wife’s love and the separation from his children, a separation that turns his world upside down. 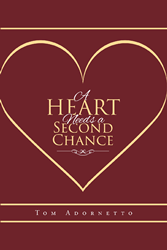 Tom Adornetto, a former manager and company negotiator, has completed his new book “A Heart Needs a Second Chance”: a riveting work that explores how Bob must endure a system that has become overcautious in protecting women and children from domestic violence. He has new life experiences and gains insights into two horrible evils of society: murder and suicide.

According to Adornetto, "This novel is a true story. The names have been changed to avoid any lawsuits for potential slander. Some of the dates and times are slightly altered. Why is it so popular to sing about love? Could it be because love is the most important emotion? According to the American Bar Association, there are currently over one million lawyers practicing in the United States, which relates to about one for every three hundred people. Women initiate divorce much more than men. Presently, the divorce rate is increasing at an astounding rate, and close to 50 percent of children are growing up in a single-parent environment. Battering is the single major cause of injury to women, exceeding rapes, muggings, and auto accidents combined. A woman is more likely to be killed by a male partner (or former partner) than any other person. According to the US Census Bureau, fathers make up approximately one in six custodial parents. In custody situations, more and more courts now favor equal consideration of both mother and father as the custodial parent. This was not always the case in past decades. It was presumed that mothers were the preferable custodial parent as they tended to be the primary caregivers. The United States lawmakers ignore that unfair custody laws can cause custody disputes that result in one of the high numbers of murder-suicides. Fathers don’t abandon their children. They are driven away."

Published by New York City-based Page Publishing, Tom Adornetto's emotional work weaves a compelling and compassionate story of courage in the face of unimaginable loss and exploring the strength it takes to conquer our greatest fears and violent impulses of revenge.

There are interventions by the jealous neighbor, the greedy psychologist, the aggressive attorney, the shelter for battered women, and Bob’s employer. Bob cannot let go because the past obsesses the present and obstructs his future. He pleads and begs for a second chance to talk out their differences.

Readers who wish to experience this powerful work can purchase "A Heart Needs a Second Chance” at bookstores everywhere, or online at the Apple iTunes store, Amazon, Google Play or Barnes and Noble.