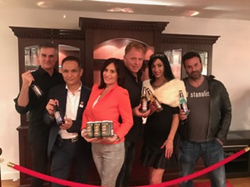 Said Billie Mitchell, CEO of Classic New York Beer, "Gary and I just loved Tom Markle, Jr.’s energy and humor. He really is a good guy who gets a bum wrap in the press because he is estranged from his sister who is now a British “Royal”.

Classic New York Beer is set to launch an ad campaign promoting their product in New York City and China and they managed to snag Tom Markle, Jr., estranged brother of Meghan Markle, Duchess of Sussex, to play the lead in a satirical, 60 second commercial spoofing on the Royal Family.

Said Mitchell, “Gary and I just loved Tom Markle, Jr.’s energy and humor. He really is a good guy who gets a bum wrap in the press because he is estranged from his sister who is now a British “Royal”. We kept in touch with Tom after the boxing match and since we were getting ready to launch an ad campaign for Classic New York Beer we thought, ‘Hey, why not see if we can work together on a satirical video that will showcase Tom’s personality and help us get the word out about our product.’ We pitched the idea to Tom and he immediately agreed. We are thrilled with the commercial. I am absolutely confident it will get people talking about and purchasing Classic New York Beer.”

The video entitled, “Classic New York Beer” depicts a well to do woman sitting in the back seat of her Rolls Royce, anxiously awaiting the return of her male co-conspirator who is pillaging a palace. When the man opens the door and jumps into the back seat the woman inquires about whether he was able to grab the “jewels”. He responds that he took something even better and reveals a bounty of Classic New York Beer.

Actress Renee Wood, who worked on the Martin Scorsese film, “The Irishman” and who will appear in the upcoming television pilot, "The Cafone", plays the woman. Tom Markle, Jr. plays the man.

The commercial is directed by Steve Stanulis of Stanulis Productions whose film "The Fifth Borough" will be opening on January 17, 2020.

The campaign will launch in early November. In addition to television, the commercial will be available for viewing on the company’s website and social media pages.

About Classic New York Beer Co.
Our mission at Classic New York Beer is to produce unique, quality beers that are second to none. We operate in an ethical and environmentally friendly standard while hand-crafting our products. At CNYB’s production facility, we strive to be a destination for the exquisite craft beer lover and a hub for the area’s foodies. Our goal is creating a treasured beer that is enhanced by being a sustainable, low-impact, and environmentally friendly company.