Top 10 Secrets to Happiness and Contentment During a Pandemic

Northwest Vista College Professor and Author Don Lucas gives the top 10 secrets to being happy and finding contentment during a time filled with constant bad news. 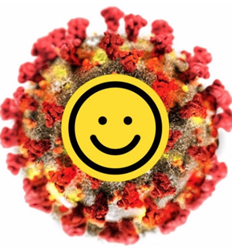 "Learn as many of these secrets as you can; and apply them to your current life’s circumstances. If you do, I promise you will have happiness to go along with your face masks and social distancing," Lucas said.

“What is the secret to happiness?”

There is no true answer to this question that is simple and short. Northwest Vista College Professor and Author Don Lucas, Ph.D, shares what psychological science has revealed as being the 10 secrets to happiness.

"Learn as many of these secrets as you can; and apply them to your current life’s circumstances. If you do, I promise you will have happiness to go along with your face masks and social distancing," said Lucas, who is author of "Being: Your Happiness, Pleasure, and Contentment."

The third secret to happiness is extraversion, your ability and, in some ways, your energy to put yourself into a social setting. Happy people have higher levels of extraversion than unhappy people do.

The fourth secret to happiness is optimism, your ability to put a positive light onto ambiguous and negative life situations. Happy people have higher levels of optimism than unhappy people do. The prototypical example of optimism—the optimist answering, “half full” to the question, “Is the glass half empty or half full?”—tells only a part of the story on how optimism is associated with happiness. The true measure of optimism and its association with happiness comes when situations are in-fact, negative. This is when the optimist’s attitude serves as a motivator to keep moving forward.

The fifth secret to happiness is a unique relationship called marriage. Based on trust and faith in a life-long confidant, marriage makes people physically healthier. When compared to unmarried people, married people are less likely to get sick; and when they do get sick, they are more likely to recover and recover at a faster rate. In fact, married people have stronger immune systems and on average live 10 years longer than unmarried people do.

The sixth secret to happiness is employment. Employment is about friendships, social relationships, goal setting, personal achievement, and money. Employment as an adult is equal to play as a child.

The ninth secret to happiness is democratic freedom. Two conclusions have emerged from extensive studies comparing levels of happiness among countries, cultures, and societies: (1) No matter where you are on Earth, the No. 1 thing people want in their lives is happiness; and (2) The more democratic a government is in ruling its people, the happier the people will be.

The last secret to happiness—which may be no secret at all to you, is money. The secret about money is how it must be used to gain happiness. If a person’s level of income threatens their basic human necessities (e.g., water, food, shelter), then having money to overcome this threat is predictive of happiness. However, once above this necessity line, the relationship between money and happiness is negligible. Beyond human necessities, happy people spend more money on others than they do on themselves, whereas unhappy people spend more money on themselves than they do on others.

Psychologists love to argue whether human behavior is by nature or nurture. With the 10 secrets to happiness revealed, it is clear happiness is mostly by nurture; you are in control of it. The only decision for you to make now is if you are going to take advantage of knowing these secrets by applying them to your own life—during this COVID-19 crisis and beyond.

Not Secrets to Happiness

Some items people often think are secrets to happiness but are not. There is no consistent scientific evidence for the following items being associated with happiness: biological sex, ethnicity, intelligence, physical attractiveness, leisure, and having children. Thus, men and women are no different from one another when it comes to being happy. No ethnic group is happier than any other is. The very intelligent are no happier than those with average or below average intelligence are. Physically attractive people are no happier than physically average and unattractive people are. People at leisure and on vacation are not necessarily happier when comparing them at work. And, being a parent makes you no happier than being a non-parent.

How about some Contentment to go along with Your Happiness?

But, imagine for a moment, an emotion beyond happiness; that is, unaffected by time and changing environments.

Okay, stop imagining because this “beyond happiness” emotion is real, and it is called contentment. Contentment produces perpetual positive emotions from doing an activity—for the sake of doing it; contentment does not produce positive emotions from the activity’s causes or effects. For example, walking is an activity being used by a lot of us as temporary escapes from our COVID-19 shelter-in-place orders. And it can be a contentment activity, bringing perpetual positive emotions for us, unless we impose conditions on it, “I only walk when it is sunny outside,” “If I can’t track my steps on my Fitbit, then I don’t walk,” “My sister isn’t walking today, so I’m not walking today either.”

Contentment is nothing new; when we were children it was our primary motivator. Playing is the definitive example of contentment. The child at play gains positive emotions from playing anything. As every parent that has ever bought an expensive gift that came in a large box knows, it does not matter to the child “what” they are playing with (expensive gift or large box). The only thing that matters is they are playing.

In addition to applying the 10 secrets to happiness over the next several weeks, practice your contentments. We all have contentments in our lives, activities we do without conditions. Don says he teaches —anytime, any topic, to anyone; he cycles—anytime, anywhere, on any bike; he cooks—anytime; any cuisine, by any means… What are your contentments?