As the street festival and concert series celebrates 25 years, it’s pulling out all the stops, with cult-favorite music acts and legendary race car drivers. 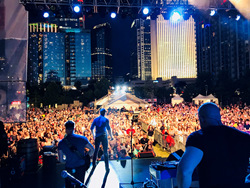 Why will the classic rock legends of STYX spend Memorial Day weekend with NASCAR sensations Joey Logano, Kyle Busch and Ryan Blaney? Because it’s time once again for Circle K Speed Street presented by Coca-Cola, Charlotte’s annual kickoff to summer. And to celebrate its 25th year, the street festival and concert series is pulling out all the stops.

The event kicks off Thursday, May 23, in Uptown Charlotte, when the streets close to vehicle traffic — except race cars, of course. There will be plenty of those, as well as lots of other fun, free, family-friendly activities throughout the weekend.

Here are the top 10 things to do at Circle K Speed Street presented by Coca-Cola as we drive into summer:

First, the details: Circle K Speed Street will take place from May 23 – 25 in Uptown Charlotte. The street festival will take place on Tryon Street beginning at noon each day, and the main concerts will be held in Romare Bearden Park. The street festival is free, as is the Thursday night concert. Tickets for the Friday and Saturday night concerts are $20 in advance and $25 at the door.

Now, the fun stuff — starting with those concerts.

Corey Smith: The country singer-songwriter will take the Ally stage in Romare Bearden Park on Thursday for a free concert. Tickets can be picked up in advance at Circle K stores and will be available at the concert gates.

Brothers Osborne: The country duo, honored three years in a row at the American Country Music Awards for duo of the year, will take the Coca-Cola stage on Friday night. Tickets are $20 in advance and $25 the day of the event.

STYX: The classic rock legends will officially send us into summer, playing the grand finale on Saturday night on the Coca-Cola stage in Romare Bearden Park. Tickets are $20 in advance and $25 the day of the event.

Celebrating teachers: Also taking the stage on Saturday night are teachers from area schools who have been nominated by their students for their commitment and their impact. All will be recognized; one will be selected to win a brand new Toyota Camry, courtesy of Circle K. (There’s never a dry eye for this one…)

Drivers galore: Circle K Speed Street presented by Coca-Cola will play host to some of NASCAR’s biggest stars. Joey Logano, Kyle Busch, Ryan Blaney, Austin Dillon, Ty Dillon, Daniel Suarez and Bubba Wallace are just a few of the drivers who will be on site to mingle with fans and sign autographs ahead of the Coca-Cola 600 on Sunday at Charlotte Motor Speedway. (Here’s a full list of driver appearances.)

Free Kids Zone: So what exactly does “family friendly” mean? The street festival will have a free Kids Zone, complete with bounce houses, slides, a climbing wall and treats kids will drool over.

Play pit crew: For those who've always wanted to know what it's like in the pit, with the pressure on to change a tire in record time, Circle K Speed Street will offer fans a chance to take a stab at changing tires on a race car (which is not as easy as it looks).

Even more music: In addition to our headliners, opening acts start at 6:30 p.m. each night in Romare Bearden Park, and free live music will be going all day long on the Mello Yello stage on Tryon Street. A full rundown of concerts is available here.

Vendors who think outside the box: Vendors will line all six blocks of the street festival, and you can count on your share of swag. Even better, visitors can play “pop a shot” with ice cubes into Circle K Polar Pop cups. They can also play cornhole, basketball or bowling — all along Tryon Street in Uptown Charlotte.

The big race: Cap off all the fun at Circle K Speed Street at the Coca-Cola 600 at Charlotte Motor Speedway. This year, the race is celebrating 60 years, so there will be plenty of anniversary festivities to enjoy.

Circle K Speed Street presented by Coca Cola has been promoted and produced exclusively by CSM Production since 1996. For more information on all five 2019 600 Festival Association events, visit http://www.600festival.com or follow us on Facebook and Instagram.