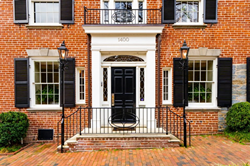 A Georgetown home where John Kennedy lived during his congressional days is for sale at $4.68 million.

“JFK's Georgetown Home”
An 1800's-era home in Washington D.C. where John F. Kennedy lived from 1949 to 1951 is for sale at $4.6 million. Kennedy was then a U.S. congressional representative from Massachusetts. According to local legend, JFK first met Jacqueline Bouvier at a nearby Georgetown neighborhood dinner party when introduced by a mutual friend.

“Steve Wynn Rolls the Dice at $135 Million”
Casino kingpin Steve Wynn is asking a high-roller $135 million for his Beverly Hills mansion. The 11-bedroom home is over 27,000 square feet with a theater, professional-style tennis courts, gym, wine room and city views.

“Kenny Rogers Sang Love Songs & Flipped Mansions”
Before celebrity home flippers Ellen DeGeneres, Meg Ryan and Diane Keaton, there was Kenny Rogers - celebrities who entertained us and flipped mansions on the side. Kenny sold his first flip in 1984 in Beverly Hills for $20 million - a record price for Los Angeles at the time. Since then, most of his homes were in the Atlanta area where he also started an interior design business that catered to Atlanta’s richest home owners.

“LeBron's Miami Mansion Rebounds”
During his years with the Miami Heat, LeBron James owned a 12,178-square-foot home on the city's Biscayne Bay. Located near the best of Miami's luxury condos and homes, LeBron sold the home in 2015 for $13.4 million. It is back on the market at $13.95 million.

“First-Time Home Buyers Set Record”
The number of new U.S. home purchases totaled over 2 million in 2019, the third year in a row. Setting a new record with numbers not seen since 2006, 39% of single-family buyers in the fourth quarter of 2019 were new buyers.

“Jeff Zucker's Manhattan Apartment”
Jeff Zucker has put his contemporary apartment in Manhattan on the market for $17.5 million. Jeff purchased the apartment in 2007 for $12.3 million, the same year he hit the top spot as president and CEO of NBC Universal.

“Rosie O'Donnell's Jersey Mansion”
When Rosie O'Donnell bought a six-bedroom home in Saddle River, New Jersey in 2013 for $6.375 million, it was one home in her large collection which also included homes in Florida and New York. In 2016, Rosie tried to sell it with no luck. It is now back on the market at $6 million.

“Pharrell Williams' Amazing Mansion For Sale”
Pharrell Williams' mansion near Beverly Hills is for sale at $16.95 million. The mostly glass, ultra-contemporary home has 10 bedrooms, over 17,000 square feet and views of the city and canyons.

“Katie Holmes Sells Her Home Fast”
Katie Holmes put her 6,000-square-foot, six-bedroom Calabasas, California home on the market in late 2019 for $4.6 million. She just sold it for a bit over $4 million.