Canada’s Food Island Brings to the Table: Lobster Feasts with Musical Fisherman, A Festival Dedicated to Shellfish, and More 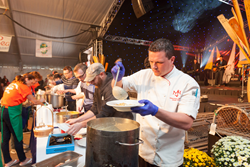 Famous for its annual harvest of quality potatoes, lobster, oysters, mussels, and more, Prince Edward Island is internationally recognized as Canada’s Food Island. Starting in May 2020 and lasting through the fall, the Island takes gastronomic tourism to a whole new level with the surprising seasonal experiences, from hands-on oyster shucking and lobster trapping, to meals cooked over open fires and a traditional Acadian dinner theater.

Celebrating its 25th anniversary in 2020, the Shellfish Festival will take place from September 17-20 with oyster shucking competitions, raw oyster bar tastings, an International Chef Challenge, and dancing at the biggest East Coast Kitchen Party. As a signature event of the annual Fall Flavors Festival, which takes place from September 4 through October 4, the Shellfish Festival grows awareness about the oyster fishing industry in PEI through five days of programming at the Charlottetown Event Grounds. Find more information and ticket prices by visiting https://peishellfish.com/en/

Chef Michael Smith authored ten cookbooks and starred in five Food Network series, before founding the Inn at Bay Fortune in the town of Souris, PEI. Whether a guest at the inn or not, travelers can attend the nightly FireWorks Feast, a meal cooked with every form of live-fire cooking known to man, including a smokehouse, open hearth, grill, rotisserie, planca, and wood oven. No gas or power is used in the making of the meal. The feast begins at 5:00pm with a one-hour tasting tour of the organic farm and herb gardens. At 6:00pm, oyster hour begins with shucking oysters over cocktails made from locally distilled spirits. At 7:00pm, the main course is served indoors over large harvest tables overlooking the bay. The feast is available seven days a week from May through October, starting at $165 CAD per person. https://innatbayfortune.com/

Local Captain JJ Chaisson of the Fiddling Fisherman takes small groups on fishing boat tours of Souris Harbour, PE, surrounded by red sandstone cliffs. Guests participating in the Lobster Lovers experience will act as part of the crew by dropping lobster traps, before cooking and feasting on the lobster onboard. After dinner, the captain will entertain the group with traditional fiddle music and dancing is encouraged. The experience is available between July and September starting at $95 CAD per person. https://fiddlingfisherman.com/

Prince Edward Island’s warm summers and red soil allow the Island to produce 25% of Canada’s total potato crop. More than 100 varieties of potatoes are harvested each year across 88,000 acres beginning in June and lasting through November. The province is home to the Canadian Potato Museum, where guests can view the world’s largest potato sculpture, tour a local farm, and eat lunch at the Potato Country Kitchen. The museum is open from May 15-October 15. Find more information and admission prices by visiting https://www.canadianpotatomuseum.info/

Acadian Dinner at the Theater

The Island’s Acadian community has descended from the original French settlers that occupied the northeastern region of North America. Today, travelers can eat traditional Acadian food while watching a French play at the Acadian Dinner Theater at the Village Musical Acadian in Wellington. Offering two comedies, Les Noces and L’Évasion, the theater promises lots of laughs and good food, including traditional Paté and Rapure, a traditional potato-like casserole, and the dessert dish of Pudding Chomeur. https://www.villagemusical.ca

For more information about the province, visit http://www.tourismpei.com.

For more information on the four provinces, visit these websites or follow on social media: