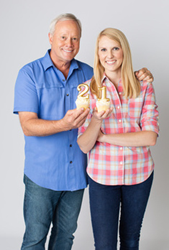 There’s really no better feeling than updating something in your house with your own two hands. And that makes me and Dad the luckiest people in the world to give that feeling to our audience each and every week!

The weekly half-hour home improvement show follows father-daughter host team Danny Lipford and Chelsea Lipford Wolf, as they work with real homeowners to tackle projects and share the successes and lessons learned along the way. Weekly featured segments include “Simple Solutions,” which offers clever tips and hacks to solve common problems in the home, and “Best New Products,” which shows off the latest-and-greatest home improvement tools and gadgets.

Boasting its biggest audience ever with 1.9 million weekly viewers, the “Today’s Homeowner” TV show has achieved a 100% renewal rate for the 2018-2019 season, and will continue to air in 207 of the 210 available Nielsen markets. This makes the show available in 109 million (90%) U.S. homes. In addition to its perfect renewal rate, “Today’s Homeowner” will enjoy several station and time slot upgrades this season. Top upgrade markets include:

In addition to its impressive U.S. audience, “Today’s Homeowner with Danny Lipford” is set to grow its viewership even more with expansion into the Canadian broadcast market this season. The show is the newest addition for one of Canada’s most unique specialty TV networks, The Rural Channel. Based in Saskatchewan, the network delivers lifestyle content to 1 million Canadian households. “Today’s Homeowner” TV will begin airing Friday, September 28, at 8 pm ET on The Rural Channel.

“I am extremely happy that we will now be airing in Canada, says Lipford. “We already have many viewers there that see our show each week due to the “bleed over” from our stations in Seattle, Detroit, Buffalo and others. I know we’ll quickly develop a loyal following in Canada for our quality, practical home improvement content.”

As one of the most respected, longest-running home improvement shows in the U.S., “Today’s Homeowner” has seen steady growth for viewership and reach during its 20-year history. The show has undergone various changes in format, production and style over the years, but one thing has remained constant: the brand’s commitment to providing fresh, practical and trusted advice for maintaining and improving homes.

A unique feature of the show is the recent addition of Lipford’s daughter, Chelsea Lipford Wolf, as full-time co-host.

“I absolutely love working with Chelsea on the show and every week she amazes me with her knowledge of home improvement,” says Lipford. “I know I have taught her a lot but she has learned a lot on her own. It’s rewarding to see how she takes basic home improvement information and adds her own unique twist and personality to projects – that’s the kind of creativity our audience members really enjoy.”

Working as the exclusive father-daughter host team for syndicated home improvement TV in the U.S., Lipford and Wolf have a natural energy and on-camera camaraderie that viewers love. The duo brings the perfect balance of trusted expertise, enthusiasm and entertainment to inspire and empower audience members to take on projects in their own homes with confidence.

"There’s really no better feeling than updating something in your house with your own two hands,” says Wolf. “And that makes me and Dad the luckiest people in the world to give that feeling to our audience each and every week!"

During this season of “Today’s Homeowner,” viewers can look forward to even more practical information to use in their homes immediately. Upcoming episodes will showcase several customization projects for kitchen and baths. In addition, Lipford and Wolf will share trends, particularly in the areas of technology and outdoor living. And finally, the audience will enjoy the opportunity to submit entries to appear in the annual “Curb Appeal Makeover” and “Win Danny and His Crew” contest episodes.

Season 21 kicks off this week with its premiere episode, “Customize Your Space,” in which Lipford and Wolf help a young family of 5 take care of a few problem areas in their home. The duo work with Whit and Andrea Qualls to relocate a kitchen island for better traffic flow, and take down a cumbersome half-wall near their home’s entry to open up the space. Viewers can visit TodaysHomeowner.com/find-a-station to locate their local affiliate and air time.

Host and founder of the brand, Danny Lipford, is among the most sought-after home improvement experts in the country. The seasoned remodeling contractor and media personality served as the home improvement expert for CBS’s “The Early Show” and The Weather Channel for over a decade and has made more than 190 national television appearances on “FOX&Friends,” “Inside Edition,” “Morning Express with Robin Meade,” FOX Business Channel, “Rachael Ray” and more. He travels the country making appearances as a brand ambassador and spokesperson, and contributes expertise to hundreds of popular magazines and online media outlets each year.