Top 10 Most Expensive Cars For a Billionaire’s Christmas 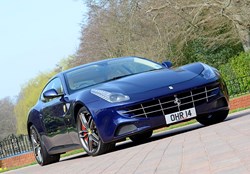 You Could Buy 363 Dacia Sanderos for 10 Top Ten Supercars

Whilst most people stuff their stocking with cheap fillers in the last days of Christmas, there’s still time for billionaires to do the same – by buying a super car at unbelievable prices.

WeLoveAnyCar.com has launched a site to help all motorists find the best car for them by price. The most expensive currently available to the public is the Ferrari Berlinetta for just £238,232

The 10 Most Expensive Cars

The list is an exclusive club of its own with three types of Ferrari, two Rolls Royces, two Aston Martins followed by a Bentley, Lamborghini and a top of the range Mercedes SLS. The total cost for all 10 – over £2 million.

The cheapest car found was a Dacia Sandero at £5,815. That means for the price of 10 supercars you could get over 363 Dacia’s - almost one for every day of the year.

The WeLoveAnyCar.com new car site can also be searched by MPG – perhaps more important to people on a slightly more restricted budget. The little Alfa Romeo Mito claims an astounding 97.4 MPG (extra urban) compared to a Bentley Mulsanne at 24 MPG.

A spokesman for the Manchester based site said, “We found it astounding that there isn’t one site that allows prospective buyers to look at all these factors and compare price and MPG. We also add ratings by over 108,000 drivers so they can look at comfort, reliability and other key factors which are important to a motorist and their pocket!”

Now that Christmas is close it remains to be seen if even a billionaire can get the car he wants. At least for the year ahead, where car pundits say new car sales will rise on the back of a better economy, prospective car buyers have the means to choose the best car for their needs.