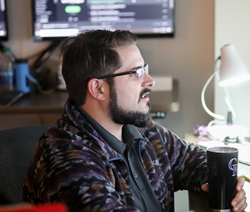 When I saw that the Ethic’s Chair position was open, I was compelled to inquire. My role is to assist and support the association into the future while providing and upholding an ethical standard of behavior among its members.

TPG Energy's Eric L. Stowe, a 3rd generation Oil & Gas Professional and Landman, has been named Chairman of the Ethics Committee for the Denver Association of Professional Landmen ("DAPL").

Eric began his career like all 3rd generation Landmen, working for his father. Both of his parents are in the industry and in his words, "the further my career gets down the dusty “ol’tract” the more I remember sitting around our family table and learning the lessons of the industry and what it means to call yourself a professional."

After working in his father’s land-shop for a number of years in Wyoming and Colorado, Eric and his father agreed it was time for him to strike out on his own. Eric landed at Denver-Purple Land Management, an independent contracting land firm, in February of 2017. In early 2018, Mr. Stowe Denver-Purple Land Management to join TGP Energy, where he currently holds the title of "Senior Landman."

Mr. Stowe credits his parents for instilling the belief in him about how important it is to be a part of, and even serve if possible, the associations that represent your role in the industry. In fact, Mr. Stowe's father served the DAPL board and has held several positions in part years.

Per Mr. Stowe, "When I saw that the Ethic’s Chair position was open on the DAPL website, I was instantly compelled to inquire. My role is to assist and support the association into the future while providing and upholding an ethical standard of behavior among its’ members which is set forth by the Code of Ethics and Standards of Practice for Landmen in today’s market. I find this role to be of the upmost importance as I truly believe that the future of this great industry relies on the leadership that it is given. To be a great leader one must exhibit the ethical standard he or she believes should be set in order to see the vision of this industry come to fruition. The land is what connects me to that standard as I have seen my family members give more to this industry than what we have taken in return, other than several honorable and respectable careers. I believe firmly in the future and need of the Oil and Gas industry, along with other minerals and yet to be discovered renewable energy sources and I dearly and most humbly want to be a part of it. These are the reasons I have chosen to serve DAPL in the said capacity of the Ethic’s Chair. I love being a Landman and at the end of the dusty “ol’tract”, when my story is written in full, I hope I can say with a full land-heart that I was a good one!"

Founded in 1952, DAPL is one of the largest Landman associations in the United States. As a non-profit organization, its primary objectives are to advance the profession of landwork; advocate continuing education; uphold the honor and integrity of the oil, gas and minerals industry; cultivate cordial relationships among its members; perpetuate the history of the land profession and the memory of its members; and abide by, foster and uphold its code of ethics.

Based in Denver, CO, TPG Energy is the premier mineral rights firm. Its professionals have decades of combined experience in the acquisition and management of oil and gas assets, title and finance. TPG prides itself on its fair business dealings. If you are interested in learning more about TPG or are interested in discussing your oil and gas asset, reach out at 720.441.6400or contact@tpgenergy.com.